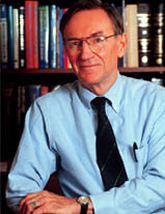 Donald P. Kommers, Joseph andElizabethRobbie Professor of Political Science and professor of law at the University of Notre Dame, has contributed a chapter to a new book on constitutional interpretation.

The book,Interpreting Constitutions:A Comparative Study,was edited by Jeffrey Goldsworthy ofMonashUniversityinMelbourne,Australia.It consists of essays by legal scholars on the high court decisions of six nations and the methodologies and philosophies employed in the courtsinterpretations of them.

Kommerscontribution is a 27,000-word essay entitledGermany:Balancing Rights and Duties.The other constitutions considered are those of theUnited States,Canada,Australia,India, andSouth Africa, and Kommersfellow contributors include Peter W. Hogg of York University in Toronto; Heinz Klug of the University of Wisconsin; S.P. Sathe, director of the Institute of Advanced Legal Studies at the ILS Law College in Pune, India; and Mark V. Tushnet ofGeorgetownUniversity.

A member of the Notre Dame faculty since 1963, Kommers teaches courses in American and comparative constitutional law and is the author of numerous books, book chapters and articles on German and American politics and law.He received an honorary doctor of laws degree from theHeidelbergUniversityinGermanyin 1998.