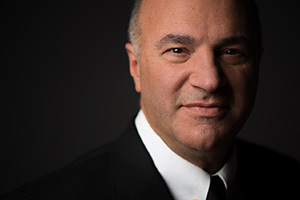 Kevin O’Leary of the ABC TV show “Shark Tank” will make a return appearance to the University of Notre Dame to speak at Mendoza College of Business from 5 p.m. to 6:15 p.m. Monday (Jan. 30).

The event, which is free and open to the public, will be held in Mendoza’s Jordan Auditorium. Seating within the auditorium is limited and guests must register online for a ticket. However, the talk is being live-streamed to Room 101 in DeBartolo Hall, a classroom building adjacent to Mendoza College of Business. Tickets are not necessary to attend the live-stream event.

O’Leary, a businessman/investor turned reality-show star, will discuss what it takes to become a successful entrepreneur, and also judge business case pitches by three teams of Notre Dame student entrepreneurs.

Known as “Mr. Wonderful” for his acerbic style on the Emmy Award-winning “Shark Tank,” O’Leary is the chairman of O’Shares Investments. He is also the founder of O’Leary Fine Wines, as well as a member of Boston’s 107-year-old Hamilton Trust. In addition to “Shark Tank,” O’Leary is a regular contributor on ABC, CNBC and CTV, and a best-selling author of two books, “Cold Hard Truth on Men, Women and Money,” and “Cold Hard Truth on Family, Kids and Money.” In 2007, O’Leary became a founding investor and director of Boston-based Stream Global Services Inc., focused on the growing out sourcing business services market.

O’Leary announced his candidacy for the leadership of the Conservative Party on Jan. 18. If he is chosen for that position in May, he will be considered as a candidate for prime minister and an opponent of the current prime minister, Justin Trudeau. Canada operates under a parliamentary system, meaning that the leader of the party that gains the most seats in parliament ordinarily becomes the prime minister; there is no direct voting for that office.

O’Leary’s talk is sponsored by the Mendoza College of Business, the Gigot Center for Entrepreneurship and the Eugene Clark Distinguished Lecture Series. Visit the events page on the Mendoza website (Mendoza.nd.edu/why-mendoza/events/) to register or get more information.