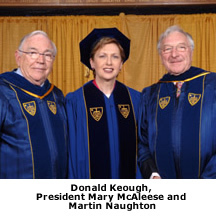 Father Jenkins announced the new name at a special reception Sunday (May 21), following the Universitys Commencement exercises. The Commencement speaker, Mary McAleese, president ofIreland, was in attendance at the reception.

Father Jenkins said the name change was proposed by Notre Dame Trustee Donald Keough, whose gift to the University established the institute in 1992. It honors Keoughs fellow Trustee, Martin Naughton, and his wife,Carmel, for their support of Irish studies at Notre Dame.

The University of Notre Dame owes much to the generosity, loyalty, counsel and friendship of the Keough and Naughton families,Father Jenkins said.In renaming our Institute for Irish Studies we wish to express our gratitude to them and to acknowledge the profound interest they share inIrelandand in Notre Dames deepening commitments there.

Naughton is chairman of the Glen Dimplex Group, one of the worlds major manufacturers of domestic appliances, with headquarters in Dunleer,CountyLouth, and factories inIreland,Canada,England,France,Germany,Holland,HungaryandNorway, and a joint venture inChina.

Elected to Notre Dames board in 1991, Naughton is a founding member of the Universitys Ireland Council. His contributions to the Universitys Irish studies programs havehelped make Notre Dame the preeminent American university inIreland. He received an honorary degree from Notre Dame in 1998 at the dedication of its study centre inDublin.

Keough is chairman of the board of Allen&Company Inc., aNew Yorkinvestment banking firm. He retired as president and chief operating officer of The Coca-Cola Company in 1993 and continues as an appointed advisor to the companys board. A member of the Universitys Board of Trustees since 1978, he served as its chair from 1986 to 1991.

Keough and his wife, Mickie, have made several other generous contributions to Notre Dame, including an endowed chair in Irish studies (held by Seamus Deane, a novelist and the worlds foremost scholar of Irish literature and culture), a summer internship program for Notre Dame students in Ireland, a mens residence hall, and Malloy Hall, which houses the Departments of Theology and Philosophy.

The Keough-Naughton Institute for Irish Studies at Notre Dame is an interdisciplinary academic project devoted to teaching and research in Irish culture. Accommodated and strengthened by Notre Dames storied links withIrelandand Irish America, the institute has become a world leader in the field of Irish studies during the last 14 years, bringing to campus the leading Irish scholars of North America andEurope.

In addition to a graduate program in which 22 students are pursuing advanced degrees, the institute offers one of the most popular undergraduate programs at the University, enrolling 908 Notre Dame students in Irish studies courses last year, 297 of them in Irish language courses.More than 60 students spent this year in Dublin studying at Trinity College or University College Dublin under the auspices of the institutes Keough-Naughton Notre Dame Centre, a restored 18 th -century Georgian building which was once the home of the legendary Irish politician, Daniel OConnell.