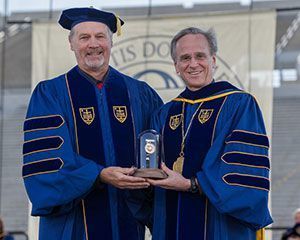 To Father Jenkins, distinguished guests, parents, friends, and above all to you guys — the class of 2014 — thank you for this incredible honor. It is humbling even to be mentioned with the likes of Dorothy Day, John F. Kennedy, Joseph Cardinal Bernadin and Sister Helen Prejean, who have received this award in the past. Indeed, I feel as though my inclusion in that list may have brought the Laetare class average down just a bit, and for that I ask your pardon. As we said in the Latin mass of my youth, Domine, non sum dignus. Lord, I am not worthy. Believe me, those words ring ever true to me today.

Although I have been to this campus many times before, I stand before most of you today as a stranger. If you know me at all, it may be from a big, heavy biology textbook you carried in high school or from brief appearances on television. Those range from the sublime on the History Channel, CNN and NOVA, to the truly ridiculous on Comedy Central, tortured at the hands of a fellow Catholic named Stephen Colbert.

But when I look at you today, I do not see strangers. I see students, scholars and seekers on a glorious day in your lives. As an educator, I see familiar faces and familiar stories. Now I’ve been lucky enough to teach at the university level for 40 years, and in that time I have learned how rare and precious it is to be part of a great school like Notre Dame. Today is truly, in the words of the 118th Psalm, a day the Lord has made. But the Lord does not work alone, and gathered around you, you see the Lord’s helpers, your parents, your families, your loved ones who made this day possible. Never forget, as proud as you may be of your own achievements, that you owe them for the lives they gave you, for the hopes they infused into your souls, and for the support that made this grand day possible. In the spirit of the word Laetare, meaning rejoice, I rejoice with them and with you.

Of several words that are inscribed upon this medal, to me the most significant is Veritas, the Latin word for truth. What is truth? In many ways, that’s what Notre Dame is all about. It is also what science is all about, and I see this medal, given to a scientist for the first time in many decades, not as an individual award, but as a powerful statement by Notre Dame about science, learning and faith.

In our culture today, there are two common myths about science. Both of them are destructive, and both of them impoverish those who hold them.

The first comes from today’s emphasis on the practical, economic value of the scientific enterprise, and it’s rooted in the reality that science really does help us to make things, invent new technologies and cure diseases. It makes our lives “better,” to use a common phrase.

But the idea that scientific knowledge is practical knowledge leads to the mistaken view that science is only practical knowledge. If you’re not going into medical school, why study biology? If you’re going into business, who cares about the chemical bond? And if you’re not going to be a physicist, why study physics? Unless, of course, you’re a fan of “The Big Bang Theory” on TV, and you really want to understand Sheldon’s bad jokes.

But science is not a body of knowledge. It’s a way of thinking. It’s a search for truth that illuminates every aspect of the human condition.

Consider, for example, mitochondria. These are tiny organelles that dwell within our cells. They are the homes of some pretty complex biochemistry, but is that all they are? Curiously, mitochondria are much more like bacteria than they are like human cells, and from that understanding comes a remarkable insight into our own existence. In his incredible book “The Lives of a Cell,” biologist and author Lewis Thomas wrote:

“There they are, … breathing for my own flesh, but strangers. … [these mitochondria], precisely the same, are out there in the cells of sea gulls, and whales, and dune grass, and seaweed, and hermit crabs, and further inland in the leaves of the beech tree in my backyard, and in the family of skunks beneath the back fence, and even in that fly there upon the window. Through them I am connected; I have close relatives, once removed, all over the world.”

We do indeed. Reading the lessons of life’s great unity would be impossible without science. And I would hope that each of you, as you leave these halls today, has come to regard science for what it truly is: a branch of learning that deepens the human spirit and enriches the poetry of life itself.

The second great myth about science holds it to be the antithesis of faith. Ironically, this is a myth that serves both the enemies of faith and science very well. Science, we are told, is reason based upon evidence. And faith, we are assured, is belief without reason. As such, the two are locked forever in conflict and cannot coexist.

But such assertions ignore the very history of western science, which has its roots in a faith that views the study of nature and its mysteries as a way to praise and understand the glory of God. It was in that tradition that Newton unwove the rainbow and revealed the laws of motion, that Father Gregor Mendel established the science of genetics, and that Father Georges Lemaitre developed the theoretical foundation for cosmic expansion. Yes, it was a Catholic priest who first described the physics of the real big bang.

As many of you may know, there are three great medallions emblazoned on the Jordan Hall of Science here at Notre Dame. The biology medallion features a DNA double helix, and the words of the great geneticist Theodosius Dobzhansky that “Nothing in biology makes sense except in the light of evolution.” Dobzhansky, like Asa Gray, Darwin’s first great advocate in America, was a Christian.

Both of these evolutionary biologists realized that faith, far from being the antithesis of reason, is actually the source of reason. Science is built upon two great elements of faith. The first is that the universe is rational, understandable and accessible to human thought. The second is that truth is to be preferred to ignorance.

And I will tell you frankly: A faith that would require one to reject scientific reason is not a faith worth having.

But a faith asserting that knowledge matters, that the world is knowable and that human reason can unlock the secrets of life is indeed a faith worth embracing. And I would hope that such a faith has graced every day of your time at Notre Dame.

That inscription on the front of the Laetare medal reads: The truth is mighty and will prevail.

Let us hope so.

Let us pray so.

And from this day forth, let each of us work to make it so.

Thank you, graduates and Notre Dame for allowing me to be part of your day. And congratulations.