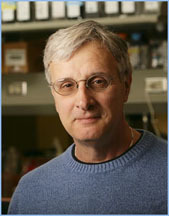 Everyone knows that inflammation signals infection or injury, like smoke does a fire. But researchers have learned that it can be an underlying cause of disease as well.

Chronic inflammation has been linked to cancer in the colon, asthma in the airways and atherosclerosis in the arteries, setting the stage for heart attacks and strokes.

And a major killer called sepsis is nothing less than inflammation run amok.

I can think of no disease that does not involve inflammation,said Francis J. Castellino, director of the Notre Dames W.M. Keck Center for Transgene Research.

Its also hard to imagine a research center better equipped and staffed to sort out the inner workings of inflammation than the Keck Center.

Located in Raclin-Carmichael Hall, the center is a world-class facility focused on the study of proteins involved in inflammation and the related process of hemostasis, the bodys way of balancing blood flow and clotting.

Research into blood proteins has been growing steadily more sophisticated at Notre Dame for more three decades under Castellinos direction, spurred by technological advances that have made it possible to study the structure and function of hemostasis-related proteins in ever more detail.

In 2004, Keck Center scientists were awarded $9 million in grants from the National Institutes of Health to study inflammation in sepsis, the genetics of colon cancer and the role of homeostasis following artery damage.

Then, in 2005, the center joined the Indiana University School of Medicine-South Bend as primary occupants of Raclin-Carmichael Hall, the new academic building just outside the Universitys main gate on Notre Dame Avenue.

The Keck Centers move to Raclin-Carmichael Hall consolidated an operation that had been spread over nine spaces in four campus buildings, assistant director Melanie DeFord said. Thats created a more cohesive work atmosphere for the centers staff of 35 scientists, technicians and students. The centers new labs, besides being about 20 percent larger overall, employ an impressive array of state-of-the-art equipment, like a laser knife so precise it can cut out individual colon cancer cells for genetic analysis.

None of it would be possible, however, without the mice that live in the basement.

A colony of 6,000 specially engineered, transgenic mice is the engine that drives the flow of discoveries from the Keck Center. Experts at the center have created more than 50 different strains of mice, with each strain having its own strategically chosen gene alterations.

Because genes are templates for production of proteins, adding or subtracting them from the genome produces mice that have excesses or deficiencies of the blood proteins that Keck scientists want to study, Castellino explained.

Studying proteins in live animals is a huge advance over the technology available to Castellino when he began studying blood proteins in the early 1970s. Back then, researchers had to tediously extract the selected protein from blood, he says. Experiments involved mixing two different proteins in test tubes to see the reaction.

But when you alter a gene in an intact animal, youre looking at everything (in a living system), starting with, Does it live for long?Castellino explained.

The care, feeding and breeding of these special mice, who reside in about 1,500 cages, is itself a big operation requiring special technical expertise and upwards of $150,000 a year to cover costs.

We have five or six people working downstairs on the colony alone,Castellino says.

The breeding pairs in the colony are giving birth to about 1,000pupseach month, DeFord said. They must each be genotyped to determine which genes they inherited from their parents, who are heterozygous for the mutations. That means that the breeding mice, for the sake of hardiness, do not themselves have highly abnormal protein. But a certain percentage of their offspring do. Genotyping determines which offspring are suitable for experiments.

Every year, Keck scientists create three to four new strains with unique alterations as new research identifies new proteins that might be relevant to disease processes in humans, DeFord said. The center has to be selective, as the expense of engineering a new mouse is so hightwo years of work and up to $100,000, according to Castellino.

We have to ask, Why do we want to make this mouse?There has to be a hypothesis,he said.

To aid those decisions, the Keck Center has laboratory resources capable of synthesizing any protein molecule that scientists can think of. Its done in sophisticated machines that exploit the protein-producing power of DNA in a variety of cells, including yeast, insect and mammalian. Candidate proteins are studied extensively in vitro before the decision is made to transect them into a mouse model.

But cooking up proteins and genetically customizing mice, impressive as it is, is not the point of the research, DeFord said. The real purpose of the center is to lay the groundwork for medical breakthroughs that battle disease and save lives.

Were not trying to make healthier mice,she said.

In Keck Center experiments, the genetically altered mice provide models of disease processes that occur in people. If researchers can figure exactly out how a disease starts or progresses in a mouse, that will provide clues about how to stop that disease in people.

Seeing what happens to the health of altered mouse is a start. But the researchers want to know much more than whether a mouse with a particular gene defect died or not, Castellino said. They also want to figure out exactly why.

To that end, the Keck Center has medical equipment and expertise found in hospitalsthat is, if mice had their own hospitals.

A tiny endoscope, for example, is used to visualize tumor growth and progression in the colons of mice genetically disposed to develop colon cancer, DeFord said. In asthma-related studies, specially equipped chambers called plethysmographs are able to measure the respiratory function of mice in reaction to irritants sprayed into the chamber. The mice move about freely in the plethysmographs during these measurements.

An equally ingenious device provides a more accurate way to measure blood pressure and heart rate in mice. Instead of the old way, putting a cuff on the mouses tail, an electronic probe is surgically implanted in its carotid artery, a feat requiring remarkable surgical dexterity. Other surgeries involve taking a vein from one mouse and grafting into another.

We have some talented people here,Castellino explains.Were talking about doing this on a mouse, for Gods sake.

Naturally, theres also the equivalent of a pathology lab at Keck to analyze tissue from autopsied mice. This includes an in-house histology lab where researchers examine cells from mouse tissues under microscopes. A device called a microdissector allows researchers to probe even deeper. It can excise individual cells from a colon cancer tumor for DNA micro-array analysis to determine which proteins are up-regulated and down-regulated, DeFord explained. Running the same test on nearby normal cells is yielding clues about what causes benign polyps to become cancerous.

Colon cancer, atherosclerosis, asthma and sepsisthe diseases that Keck Center researchers have targetedtake an enormous human toll. The American Cancer Society estimates that colorectal cancer killed 55,000 people in 2006. Heart attacks, a result of arterial plaques in atherosclerosis, cause about 450,000 deaths annually in the U.S., according to the American Heart Association. Asthma afflicts 20 million Americans, including 9 million children, and causes about 4,000 deaths annually.

The least familiar of Kecks target diseases, sepsis, is a major health problem that occurs when an infection overwhelms the system. The bodys responsesincluding out-of-control inflammation and blood clottinglead to organ failure.

Doctors dont understand exactly what sets off sepsis, and they do not have a good medicine to stop it once it gets rolling. About 750,000 people go into septic shock each year, and an estimated 28 percent of them die.

While thousands of researchers around the world are studying these diseases, DeFord said the Keck Center is unique in its focus on homeostasis-related blood proteins and its capacity to study them at all levels, from molecules to cells to whole animals.

No other place can synthesize a protein, evaluate it, put it in a living mouse and then analyze the results in such detail.

I think that makes us special,she said.