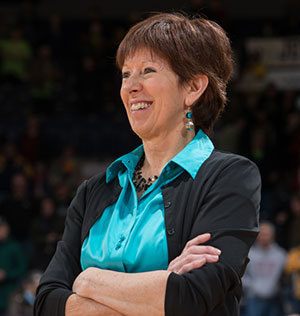 Karen Robinson Keyes was a standout player for Notre Dame from 1987 to 1991 under Coach Muffet McGraw, whose position will now carry the title Karen and Kevin Keyes Family Head Women’s Basketball Coach. Karen’s husband, Kevin, was a varsity tennis player for the Irish and is now the president and a member of the board of directors of Annaly Capital Management.

“We are so very grateful to Karen and Kevin for this generous and groundbreaking gift,” said Rev. John I. Jenkins, C.S.C., Notre Dame’s president. “It is especially fitting, given the central role Karen played in the early success of a women’s basketball program that has become — on and off the court — one of the very best in the nation.”

The endowment is thought to be the largest in women’s collegiate basketball and launches a new initiative at Notre Dame to endow coaching positions and student-athlete scholarships. It will be used to underwrite the position’s annual salary.

“We are very grateful to Karen and Kevin for this remarkable gift,” said Jack Swarbrick, vice president and director of athletics. “The fact that Notre Dame’s first head coach endowment comes from one of Coach McGraw’s former players and her family speaks volumes about the impact Muffet has had on the young women who have been a part of the Notre Dame women’s basketball program. Kevin was also a varsity athlete at Notre Dame, and we know that both he and Karen believe passionately in the role that athletics plays in the education of young student-athletes and the power of a great educator like Muffet to impact lives. We are extraordinarily grateful to Karen and Kevin for enabling us to make sure that Muffet can continue to educate many more young women in the years to come.”

McGraw added: “I am overwhelmed and humbled by the incredible generosity that Karen and Kevin have shown with this gift. Karen holds a special place for me as one of my first point guards here, and she, Kevin and their family remain a treasured part of the Notre Dame women’s basketball program. It means so much to me to have our alumnae remain close to our program year after year as we continue to build on the foundation that they created, both on the court and in our community.”

Karen Keyes earned bachelor’s and master’s degrees from Notre Dame in American studies and business, respectively. She was the Midwestern Collegiate Conference player of the year as a junior and senior and finished as the program’s career scoring leader (she now ranks ninth). She is currently the head women’s basketball coach at Ridgewood (New Jersey) High School, serves on the board of Reed Academy School for Autism and is a member of the Women for Health Network at The Valley Hospital.

Kevin Keyes earned his bachelor’s degrees in economics and business administration (ALPA Program) at Notre Dame. He has been an officer at Annaly Capital Management since 2009, a leading real estate investment trust. Previously, he worked at Bank of America Merrill Lynch, Credit Suisse First Boston and Morgan Stanley Dean Witter. He is also on the advisory board of the Rock and Roll Forever Foundation.

The Keyes are members of Notre Dame’s Advisory Council for the Student-Athlete.

“Muffet is one of the most important influences in our lives,” Karen Keyes said. “We are proud to honor her, recognize her dedication to the University and continue to admire all of the successful women she has coached and developed over her entire career.”

Residents of Ridgewood, the Keyes are the parents of three children, Katie, Cassie and John, and previously have supported Notre Dame through the Joyce Grant-in-Aid Program, President’s Circle and Sorin Society.

As a senior, Karen led the Irish to their first top-20 ranking. Since then, the program has become a national power, winning the NCAA championship in 2001, reaching the Final Four on six occasions (including the last four) and earning 19 consecutive NCAA Tournament berths.