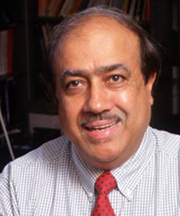 The International Association for Wind Engineering has named Ahsan Kareem, Robert M. Moran Professor of Civil Engineering and Geological Sciences at the University of Notre Dame, the inaugural recipient of the Alan G. Davenport Medal.

Kareem, who also serves as director of the NatHaz Modeling Laboratory at Notre Dame, was cited forfundamental contributions to quantification, modeling, simulation and analysis of wind load effects for structural design.He received the award during the recent 12th International Conference on Wind Engineering in Cairns, Australia.

An internationally recognized scholar, Kareem specializes in probabilistic structural dynamics, fluid-structure interactions, structural safety and mitigation of natural hazards. Using computer models and laboratory and full-scale experiments, he studies the environmental loads of wind, waves and earthquakes on structures in order to understand and predict the impact of natural hazards on the constructed environment.

Kareem, who joined the Notre Dame faculty in 1990, has served in the administration, management and organization of numerous professional societies including the American Society of Civil Engineers (ASCE), as well as committees of the National Research Council, National Academies of Engineering and Sciences and the American Association for Wind Engineering. Healso has served as a senior consultant to major oil and insurance companies, engineering companies and the United Nations.

In addition to this most recent honor, Kareem was appointed advisory professor to Tongji University, Shanghai, China, in 2006. He received the Robert H. Scanlan Medal for outstanding original contributions to the study of wind-load effects on structural design in 2005 and the Jack E. Cermak Medal in recognition of his contributions to the study of wind effects on structures in 2002. Both the Scanlan and Cermak awards are sponsored by the ASCE. His receipt of all three medals is an unmatched recognition in this field.

Kareem also was named the winner of the 1997 Engineering Award by the National Hurricane Conference for his efforts in developing the ASCE7-95 Standard for Minimum Design Loads for Buildings and Other Structures to reduce hurricane-spawned damage. In addition, he received the 1984 Presidential Young Investigator Award from the Office of Science and Technology, the White House/National Science Foundation.

Awarded in recognition of distinguished achievement in wind effects on structures, the Davenport Medal honors Alan G. Davenport of the University of Western Ontario. Among his many contributions, Davenport pioneered the study of wind effects on tall buildings in boundary layer wind tunnels. The first application his methodology was the World Trade Center. Davenports work has led to contributions to the scientific understanding and innovative design studies for major structures and many of the tallest buildings and largest bridges in the world.