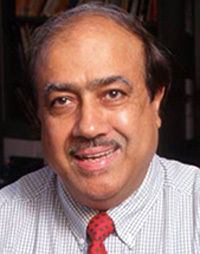 Ahsan Kareem, Robert Moran Professor of Civil Engineering and Geological Sciences at the University of Notre Dame, has been elected a foreign fellow of the Indian National Academy of Engineering. With this election, he joins an elite group of engineers from India who are also leaders in the United States. Earlier this year Kareem was elected a member of the U.S. National Academy of Engineering (NAE), one of the highest professional distinctions accorded to an engineer who has made outstanding contributions to engineering research, practice or education. Kareem, who is director of Notre Dame’s NatHaz Modeling Laboratory, has long been involved in active research and education initiatives in India, including his work at the Structural Engineering Research Center in Chennai (Madras) as a United Nations Development Program consultant. In collaboration with researchers in Chennai, he has been developing a major cyclone resistant design initiative using the large-scale facilities in the center. He also is the lead U.S. collaborator for a project titled “New Frontiers of Education and Research in Wind Engineering” at Tokyo Polytechnic University’s Global Center for Excellence, which is funded by the Japanese Ministry of Education, Culture, Sports, Science and Technology. A Notre Dame faculty member since 1990, Kareem specializes in probabilistic structural dynamics, fluid-structure interactions, structural safety, the mitigation of natural hazards and applications of cyberinfrastructure for the analysis and design of civil infrastructure. To better understand and predict the impact of natural hazards on the constructed environment, he uses computer models and laboratory and full-scale experiments to study the dynamic effects of environmental loads under winds, waves and earthquakes on structures and to develop mitigative strategies/devices to enhance the performance and safety of structures. Kareem has served in the administration, management and organization of numerous professional societies including the American Society of Civil Engineers, as well as committees of the National Research Council, NAS/NAE, the International Association for Wind Engineering and the American Association for Wind Engineering. He serves on the editorial boards of several technical journals and has been associate editor, editor, editor-in-chief and guest editor of international journals. He also has served as a senior consultant to several major oil, insurance and consulting engineering companies. A graduate from the West Pakistan University of Engineering and Technology, through a joint program with the Massachusetts Institute of Technology, he earned his master’s degree in structural engineering from the University of Hawaii. Kareem earned his doctorate in civil engineering, with a focus on structural and fluid dynamics, from Colorado State University.