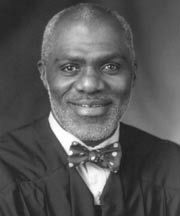 Justice Alan C. Page, a justice on the Minnesota Supreme Court and a 1967 graduate of the University of Notre Dame, will be the principal speaker and the recipient of an honorary doctor of humane letters degree at the University’s 159th Commencement exercises May 16 (Sunday). The ceremony will begin at 2 p.m. in the Joyce Center on campus.p. Page will be the rare recipient of a second honorary doctorate from Notre Dame; he received a doctor of laws degree from the University in 1993.p. "We speak in our mission statement of Notre Dame creating an environment that ‘fosters the development in its students of those disciplined habits of mind, body and spirit which characterize educated, skilled and free human beings,’ " said the University’s president, Rev. Edward A. Malloy, C.S.C. “Few of our graduates better epitomize these ideals than Alan Page.”p. “It is testimony to the tremendous respect we have for Alan that we would invite him to accept a second honorary degree and, this time, speak to our graduating class. We’re delighted that he has accepted and will honor us with his presence.”p. With his election in 1993, Page became the first African-American to sit on the Minnesota Supreme Court. He had previously served as an assistant attorney general for the state and, prior to that, practiced law with the Minneapolis firm of Lindquist&Vennum.p. Page attended the University of Minnesota Law School while continuing a long and distinguished career in the National Football League, and earned his degree in 1978.p. A three-year starter at defensive end for Notre Dame, Page was a consensus All-American and led the Fighting Irish to the 1966 national championship as a senior. After graduating in May 1967 with a bachelor’s degree in pre-law, he was selected by the Minnesota Vikings in the first round of the NFL draft. He played for 11 1/2years in Minnesota as one of the famed “Purple People Eaters” and for 31/2 years with the Chicago Bears.p. A four-time defensive player of the year, Page became in 1971 the first defensive tackle in NFL history to earn the league’s Most Valuable Player Award. He played in four Super Bowls and eight Pro Bowls and in 1988 was elected to the NFL Hall of Fame. His collegiate career was similarly recognized in 1993 with induction into the College Football Hall of Fame.p. In addition to his many professional accomplishments, Page and his wife, Diane, established the Page Education Foundation in 1988 to provide educational grants to students of color to attend colleges and universities in Minnesota and Notre Dame. In partnership with the Notre Dame Club of Minneapolis, the foundation has awarded grants to five current Notre Dame students. As a condition of receiving the funds, Page Scholars serve as role models and mentors for younger children. To date, the foundation has awarded some 4,000 grants to 1,885 students totaling more than $2.5 million.p. Among the many honors bestowed on Page are six other honorary degrees, the 2004 Theodore Roosevelt Award from the NCAA, the organization’s highest honor, and the NCAA’s Silver Anniversary Award in 1992. He was inducted into the International Scholar-Athlete Hall of Fame in 2002 and received the Dick Enberg Award from the Academic All-America Hall of Fame in 2001.p. In addition to his previous honorary degree from the University, Page received the Rev. Edward F. Sorin, C.S.C., Award in 1992 from the Notre Dame Alumni Association for distinguished service to the University. He was a member of the Notre Dame Law School Advisory Council from 1993 to 1999.