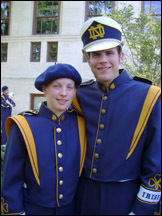 A friendlier young woman youll never meet, just dont tell her she cant do something.

Caitlin Lambert, a junior chemical engineering major from Rochester, N.Y., was born with a portion of her left hip missing.She spent the first two years of her life undergoing surgeries and wearing various types of casts and braces.She doesnt remember any of it, but figures the challenges she unknowingly overcame then might have played into her determination less than a year ago to join the Notre Dame Bandan ambitious goal for any young musician, much less someone who had never even played a kazoo, let alone (of all things) a sousaphone, or marching tuba.

Now one of 18 tuba players in one of the best and most historic collegiate bands in the country, Lambert laughs about how it all came to be.

My boyfriend, Matthew Lucia, is in the band, and last year we road-tripped together to the Notre Dame-Georgia Tech game,she explained.He brought his trombone into the stadium and played all of the songs, since our band wasnt there, but when he attempted the alma mater (Notre Dame, Our Mother), he couldnt remember parts of it.I pointed out when notes were too high or too low, and eventually we got it.He said, Youre a natural.You should probably learn to play something.So, I took his advice.

It wasnt until Lucia tried to steer her away from the tuba becauseit would probably be too heavyfor her to carry, that Lambert decidedThats it!Im playing the tuba.She began lessons for course credit last spring with assistant band director Emmett OLeary, and in very short time grew to love the tuba, as she earned the respect of her teacher.

Caitlins determination and work ethic have been amazing,OLeary said.She has put in more time practicing than any beginning student Ive ever had before.Above all, she has shown a real passion for music and tuba playing, which is not common.I think her participation in the band this year is a true testament to her hard work and the quality of student that she is.For her to take on the difficult task of learning a new instrument to the level necessary for participation in the Notre Dame Band and at the same time maintain her studies in chemical engineering is truly amazing.

Yes, when shes not marching around the field lugging a 50 pound brass instrument nearly as tall as she is, Lambert likes to discuss thepretty cool thermodynamic propertiesof ionic liquids.She serves as a teaching assistant in Introduction to Engineering Systems and has worked on the research team of Joan Brennecke, Keating-Crawford Professor of Chemical and Biomolecular Engineering and director of the Notre Dame Energy Center, for whom Lambert currently conducts laboratory work.

What a hoot!she said.Caitlin was planning on doing a senior thesis with me this year, but those plans got modified when she made the band!Last year she worked with me on a project to extract pomegranate juice using supercritical CO2.The extracts were sent to a researcher at M.D. Anderson Cancer Center in Houston to be tested for anti-cancer activity.I really admire Caitlins big dreams and determination to achieve them.

Feeling adequately challenged for the moment juggling band and academics, Lambert says in the spring she plans to resume some of her pre-band extracurricular activities.Those include volunteering in the College Mentors for Kids program and tutoring youths at the South Bend Juvenile Correctional Facility.Her goals also extend past graduation.

I want to go to graduate school, earn my doctorate and pursue a career in industrial research and development, but first I want to do a year of service work,she said.Im considering working with abused children for Sisters of Mercy of the Americas.

Her parents must really be proud, unless, maybe they dont know.

Lambert had planned tosurpriseher mom and dad with the crazy news that shed learned to play the tuba and had made the band by greeting them at a football game this fall dressed in full uniform.She didnt pull it off.Her dad received a bill for her music lessons, and her mom saw her on television as a camera panned over the band at (what else?) this years Georgia Tech game.