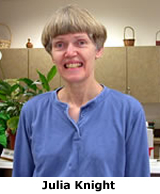 Julia Knight, Charles L. Huisking Professor of Mathematics at the University of Notre Dame, will be presented with the Universitys 2007 James A. Burns, C.S.C., Graduate School Award at the schools first commencement ceremony Saturday (May 19) at1 p.m.in the DeBartolo Performing Arts Center.

The award is given annually to a faculty member for distinction in graduate teaching or other exemplary contributions to graduate education.

Knight received her doctorate in mathematics from theUniversityofCaliforniaatBerkeleyin 1972 and joined the Notre Dame faculty in 1977. Her research interests are in logic and computable structure theory.

Director of graduate studies for mathematicsat Notre Dame since 2003, Knight has been recognized nationally for both her numerous contributions to her field and for excellence in educating graduate students. Colleagues have described her role as mentor to students as her greatest strength. Often described as theguardian angel of logicians,she is famed for finding collaborators and funding for students.

In 2004, Knight and several other members of the logic group in the Department of Mathematics received a National Science Foundation (NSF) research training grant.

The NSF grant is based in large part on Dr. Knights practices,Stephen Buechler, associate dean of theCollegeofScience, said.The NSF awards only five or six such training grants per year across all of mathematics and statistics, making this a distinctive accomplishment.

Father Burns was the first Notre Dame president with an advanced degree, a doctorate fromCatholicUniversity, and he was the leading reformer of Catholic education in theUnited Statesin the first quarter of the 20 th century. One of his most significant accomplishments was to raise academic standards by recruiting faculty with doctoral degrees.