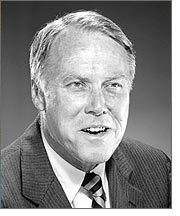 U.S. Circuit Judge John T. Noonan Jr. will deliver the fourth annual Erasmus Lectures at the University of Notre Dame at 5 p.m. on Tuesdays and Thursdays from Sept.23-Oct.16. The eight lectures in the series, entitled “Deepening the Doctrine: The Development of Catholic Moral Teaching,” will be given in the Notre Dame Law School’s court room.

Noonan presides on the United States Court of Appeals, Ninth Circuit, which has jurisdiction over most of the American West. A former Notre Dame Law School faculty member, he received the University’s highest honor, the Laetare Medal, in 1984.

A Boston native, Noonan was graduated from Harvard University in 1946, studied English literature at Cambridge University for a year, and returned to this country to earn master’s and doctoral degrees in philosophy from the Catholic University of America. Having received a degree from Harvard Law School in 1954, he joined a Boston law firm while simultaneously joining the Eisenhower administration’s National Security Council.

Noonan’s long teaching career began seven years later, when he joined the faculty of the Notre Dame Law School, where he taught from 1961-1966. He taught at the University of California Law School at Berkeley from 1966-86. He also has been a visiting professor of law at Notre Dame, Boston College, Harvard, the Angelicum in Rome, UCLA, Stanford and Southern Methodist University.

Noonan is the author of numerous books, including “The Scholastic Analysis of Usury,” “Contraception: A History of Its Treatment by Catholic Theologians and Canonists,” “Power to Dissolve: Lawyers and Marriages in the Courts of the Roman Curia,” “Bribes,” “The Lustre of Our Country: The American Experience of Religious Freedom,” and “Narrowing the Nation’s Power: The Supreme Court Sides With the States.” He also has contributed essays, articles and reviews to such magazines and journals as Commonweal, The Tablet, The Wilson Quarterly, National Review, America, and The New York Times Book Review.

In addition to his service on the federal bench, to which he was appointed in 1985 by President Reagan, Noonan has been a consultant for the Presidential Commission on Population, the National Institutes of Health, the National Endowment for the Humanities, the Ford Foundation, the Rockefeller Foundation, and the American Law Institute.

Noonan has served as a consultant for several agencies in the Catholic Church, including the U.S. Catholic Conference’s committees on moral values, law and public policy, law and life issues, and social development and world peace, and the Papal Commission on Problems of the Family. He also has been a governor of the Canon Law Society of America, and director of the National Right to Life Committee.

The Erasmus Lectures are sponsored by the Erasmus Institute and made possible by funds from The Pew Charitable Trusts and the William J. Carey Endowment.