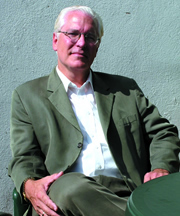 Gabriel Meyer, author of the recently published bookWar and Faith inSudan,will give a lecture at 7:30 p.m. Feb. 23 (Thurs.) in Room 131 of the University of Notre Dames DeBartolo Hall.

Sudan, a desert nation of 35 million and the largest country on the African continent, has been afflicted by a civil war which has killed more than 1.5 million people in the last 21 years.Meyer, an award-winning journalist, novelist and poet, first visited the country in 1998 to interview human rights activist Bishop Macram Max Gassis and to travel with him through his diocese in theNubaMountains.He revisitedSudanthe next three years to write and help produce a documentary film,The Hidden Gift: War and Faith inSudan,on Bishop Gassiswork among the Nuba and other forgottenpeoples of the country.

A resident ofJerusalems Muslim Quarter in the 1980s, Meyer won several awards from the Catholic Press Association for his coverage of the first Palestinian intifada in 1989. He has traveled widely in the Middle East, particularly inEgyptandTurkey, to report on the regions ethnic and religious minorities, and in the Balkans during the Bosnian war.He also is author of two novels,In the Shade of the TerebinthandThe Gospel of Joseph.