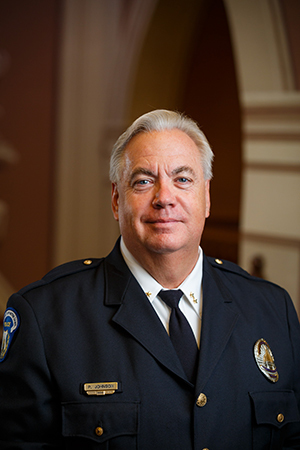 University of Notre Dame police chief Phillip A. Johnson has been promoted to senior director of campus safety and emergency management, and Keri Kei Shibata will succeed him as chief of Notre Dame Security Police (NDSP), both effective July 1.

Chief since 2007, Johnson has concurrently been responsible for directing Notre Dame’s emergency management efforts for the past two years. He will continue in the latter role, managing a program that includes extensive annual training to more than 300 campus leaders, multiple simulations and tabletop exercises, management of the campus-wide NDAlert emergency notification system, and coordination with local, state and national law enforcement, fire departments, emergency medical services and others in the field. He also interacts with numerous other higher education institutions in identifying best practices in safety and emergency management.

“Nothing is more important than the safety of students, faculty, staff and visitors on our campus, and that is especially true in the event of an emergency,” said Rev. John I. Jenkins, C.S.C., Notre Dame’s president. “We are exceptionally blessed to have a person with Phil’s experience and knowledge leading these critically important efforts.”

In his new role, Johnson also will assist Mike Seamon, vice president for campus safety and event management, with the daily operations within the campus safety division, which is composed of the NDSP, Notre Dame Fire Department, Office of Risk Management and Safety and emergency management. He also will be responsible for assisting in the coordination and implementation of various safety elements associated with major University events, including commencement, Alumni Reunion Weekend and home football game weekends.

Johnson joined NDSP as assistant director in 1986, was named associate director in 2005 and became director/chief two years later. During his 30-year tenure at the University, he has overseen police investigations, special events operations, technical services, crime prevention, administration and budgeting, traffic/parking, training and student employment in the department.

He was appointed by Govs. Mitch Daniels and Mike Pence to serve on the Indiana Homeland Security Foundation Board of Directors and is a member of the board of directors for the Indiana Association of Chiefs of Police. A longtime member of the International Association of Campus Law Enforcement Administrators, he is a past president of the organization. He has made numerous presentations to professional organizations on public safety matters, including active shooter/rapid response training, prevention of workplace violence, the Clery Act, town-gown relations and major special event management.

Johnson earned his bachelor’s degree in sociology and master’s degree in business administration from Notre Dame. He completed basic police training in Michigan and is a certified law enforcement officer in Indiana and a graduate of the Police Executive Leadership College at Ohio State University. He previously served as director of security at Carleton College in Northfield, Minnesota, and director of campus safety at Aquinas College in Grand Rapids, Michigan. 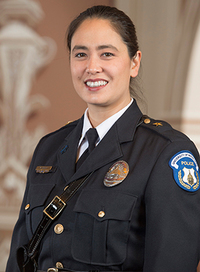 A 12-year veteran of the NDSP, Shibata most recently has served as deputy chief for safety services. She previously has been responsible for the University’s 911 dispatch center, crime prevention and outreach, security and guest services, Clery Act reporting, training for NDSP personnel and campus safety officers, including security support of all residence halls on campus. A sworn police officer, Shibata focuses on campus law enforcement, sexual assault, domestic violence and the Clery Act.

“Keri Kei is a talented law enforcement officer who has demonstrated excellence in every role she has filled with NDSP,” said John Affleck-Graves, executive vice president of the University. “I look forward to working closely with her, Phil and Mike as we seek to provide a safe and secure environment for all who live, work and visit here.”

Shibata earned a bachelor’s degree from Bethel College in Mishawaka, Indiana, and is a 2016 graduate of Notre Dame’s Executive MBA Program. After serving for one year with NDSP as one of the first members of the University’s residence hall squad, she was selected for a police position and received training at the Indiana Law Enforcement Academy in Plainfield. She was certified in August 2005.

NDSP is fully authorized as a police agency by the state of Indiana. The department employs 34 sworn police officers, as well as non-sworn campus safety officers, all of whom patrol campus and respond to emergencies. Additional staff members work as security monitors, in parking services or in other support positions in the department. Notre Dame police officers complete state-mandated training requirements established for law enforcement officers and have the same legal authority as any other police officer in Indiana. They frequently work with city, county, state and federal law enforcement authorities on investigations and crime prevention programs to provide the best possible police services to the campus and local communities.