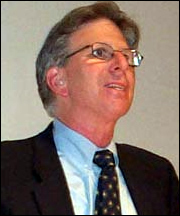 Rabbi Michael Signer, the Abrams Professor of Jewish Thought and Culture at the University of Notre Dame, has been named the Man of Reconciliation 2005 by the Polish Council of Christians and Jews. The title is awarded each year to individuals from outside Poland who have made significant contributions to the Christian-Jewish dialogue in Poland.

The Polish Council of Christians and Jews simultaneously recognized Signers cooperation with Professor Hanspeter Heinz of the University of Augsburg, Germany, who was named the Man of Reconciliation 2004.

Signers contributions to the Christian-Jewish dialogue in Poland include lecturing in Polish seminaries and Catholic theology faculties in 1995, and participation in a 1997 seminar in both Auschwitz and Krakow, Poland, on the future of the Auschwitz concentration camp.

Signer was a co-author of “Dabru Emet: A Jewish Statement on Christians and Christianity,” signed by more than 300 rabbis, which calls on Jews to acknowledge church efforts in the decades since the Holocaust to revise Christian teaching about Judaism. He is the author of several books, including “Humanity at the Limit: The Impact of the Holocaust Experience on Jews and Christians” and “Memory and History in Judaism and Christianity.”