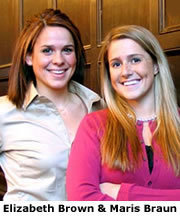 A 35-year gender barrier has been broken at Notre Dame with the election this week of the Universitys first ever, all-female ticket for student body president and vice president.

Junior Elizabeth Brown fromFt. Wayne,Ind., and sophomore Maris Braun ofCincinnati, defeated the Danny Smith/Ashley Weiss team Sunday by a 15-13 vote in a closed Student Senate meeting that was necessary because neither ticket won the required 50 percent plus one of the student vote.

Traditionally, a female candidate has not even considered running with another female because it’s seen as a liability,she said.I think this is primarily because it has never been done before, so when I decided to ask Maris to run with me, I knew we were facing a significant challenge. Not only would we be running against a strong opposing ticket, but we would also be running against the norm of a gender balanced ticket. We certainly did not run together in order to become the first all-female ticket, but we are extremely excited to be a part of Notre Dame history.

Both Brown and Braun say they became interested in politics while growing up, due, in large part, to lively political debates among parents and siblings at home.Braun lists 1984 vice presidential candidate Geraldine Ferraro as an early fascination for her.

Thats no surprise to David Campbell, assistant professor of political science at Notre Dame and co-author ofSee Jane Run: Women Politicians as Role Models for Adolescents.His research has shown that girlsincreased interest in politics can be heightened by women running for office, and further charged by family discussions.

The election of these two women also shows a cycle with regard to political role models,Campbellsaid.They became interested as a result of political debate at home among family members, and by being elected here at Notre Dame, they too are helping to normalize women in politics, thus serving as role models themselves.

That said, Braun insists the focus should remain on who is best for the job.

We really didn’t focus on the fact that our gender differentiated us from previous administrations,she said.Liz and I felt firmly throughout the whole campaign that the focus should be on the fact that we simply were the most qualified, most experienced ticket, not that we were making history.

Their goals, abbreviated in the campaign sloganRaising the Bar, Redefining the Standards,are specific, including creating a free student shuttle service between Notre Dame and the South Bend airport, a new emphasis on community relations, including a community-based curriculum, and making Martin Luther King Day an officially recognized University holiday.

Brown, a political science and peace studies double major, has served for the past year as current student body president Lizzi Shappells chief executive assistant and has served on five Student Senate committees. Braun is a student senator for Breen-Phillips Hall and serves on the Senate Community Relations and Academic Affairs Committees.Despite extensive experience with student government, for now, their political aspirations end at Notre Dame.

After I graduate, I plan on attending law school to pursue a career in international human rights law,Brown said.I’m much less interested in domestic politics, so I doubt I’ll consider any sort of domestic office after law school. I’d like to take a year off after college and find an international service opportunity.

I really dont see a political future for me,Braun admitted.Politics has always fascinated me, but I guess my ambition to run for student body vice-president ultimately was born not from a love for politics but from a desire to make Notre Dame the best place it can be.

Although the young women consider it a fringe benefit that their election made campus history, theyre not above a wee bit ofhigh-fiving.

Its about time there was an all-female ticket,Braun said.