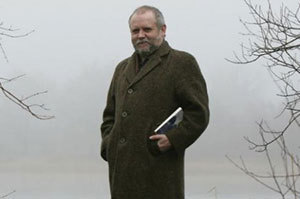 Irish novelist Patrick McCabe will speak on “Irish Village Life Over 100 Years: From Brass Band to Broadband” at 4 p.m. Friday (Aug. 30) in the Rare Books Room of the Hesburgh Library on the campus of the University of Notre Dame.

McCabe’s lecture is sponsored by Notre Dame’s Keough-Naughton Institute for Irish Studies as one of a series of events marking the 20th anniversary of the Institute’s founding.

A native of Clones, County Monaghan, McCabe, who calls his style of writing “bog gothic,” has received numerous literary awards and was shortlisted for the prestigious Booker Prize for Fiction in 1992 and 1998. He is author of 12 books, including two that have been adapted into films, “The Butcher Boy” and “Breakfast on Pluto.” His novel “Winterwood” was selected as the best Irish novel in 2007 by the Irish Book Awards. Other books he has written include “The Dead School,” “Call Me the Breeze,” “The Holy City” and “The Stray Sod Country.”

“McCabe is a true original,” according to critic and novelist John Banville. “Like Roddy Doyle writing about life in working-class Dublin suburbs, McCabe has used stuff the rest of us didn’t bother with and made a peculiar kind of rough poetry out of it. He catches that particular kind of bizarre, insane world of Irish country life in the ’50s and ’60s. People like Sean O’Faolain and Frank O’Connor wrote about it in lyrical mode, and John McGahern wrote about it in tragic mode, but McCabe writes about it in a kind of antic black comedy that is absolutely unique.”