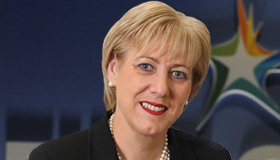 The University of Notre Dame was praised “for promoting and preserving Irish culture around the world” by the Irish government’s minister for culture in her remarks at a dinner hosted by Notre Dame Wednesday night (April 1) in O’Connell House, the Dublin home of the University’s Keough-Naughton Institute for Irish Studies.

Before an audience that included leaders of Ireland’s government, arts and cultural institutions, and universities, Heather Humphreys, Ireland’s Minister for Arts, Heritage and the Gaeltacht, thanked Notre Dame “for embracing so wholeheartedly the spirit of the Ireland 2016 program,” the Irish government’s centenary celebration of the 1916 Easter Rising.

Speaking of “1916: The Irish Rebellion,” the television series produced by the Keough-Naughton Institute that will be broadcast worldwide during the centenary, Humphreys asked: “What better way for our Irish diaspora to connect with the story and the impact of the rising than through Notre Dame’s documentary series?”

Humphreys also spoke of “Reframing 1916,” the series of international academic events which Notre Dame will sponsor in cooperation with Irish embassies and consular services during the centenary.

“By screening the documentary in major cities around the world, you will make the story of the 1916 rising accessible to millions,” she said, “because as we all know, Ireland is not just an island of 6 million people. Ireland is a global tribe of 70 million people. And we want the Irish diaspora to be centrally involved in Ireland 2016.”

The minister praised the Irish community in the United States for its participation in and support of the Irish culture, adding that “institutions like Notre Dame do so much to promote and preserve Irish culture around the world. With your documentary series, you will bring discussion and debate on the rising to academic audiences in a host of major cities around the world. Our academic institutions here in Ireland and abroad are the ideal setting for exploration, debate and analysis as we commemorate the events of 1916, consider our achievements over the last 100 years and look ambitiously to our future.”

The minister concluded her remarks by pronouncing herself “delighted and proud to recognize Notre Dame as an official partner of the Irish Government for Ireland 2016,” adding, in Irish, “Go raibh maith agaibh,” (roughly, “thanks a million”).