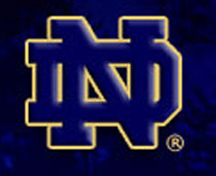 Sixteen of 20 athletics programs at the University of Notre Dame compiled graduation rates of 100 percent, and none were below 90 percent, according to a new measurement developed by the NCAA.

The Graduation Success Rate (GSR) was created to more accurately reflect actual graduation rates by including transfer data in the calculation. The graduation rate methodology used for the past decade by the Department of Education counts all student-athletes who transfer from or leave an institution for any reason as non-graduates from their initial school, even if they leave in good academic standing.

College and university presidents asked the NCAA to develop a new methodology that takes into account the mobility among students in todays higher education environment. Research indicates that approximately 60 percent of all new bachelors degree recipients are attending more than one undergraduate institution during their collegiate careers.

Here are the top 10 in that category:

Here are the top 10 in the category:

When the final regular season USA Today football poll of coaches is re-ranked by football GSR score, Notre Dame (sixth in the actual poll) finishes first in that tabulation at 96 percent, just ahead of Clemson at 94 percent (23rd in actual poll).

Here’s the re-ranked version of the USA Today poll, based on GSR scores:

The national GSR for Division I-A is 76 percent. Only team rates were released; an aggregate rate for each institution will be announced in late January.

The first-year GSR data is based upon the entering classes from 1995 to 1998.

Todd Petr, the NCAAs managing director of research, said the total number of students included in the GSR compared with the total included under the federal mandate is evidence that the new methodology provides a more comprehensive assessment. The GSR is an analysis of more than 91,000 student-athletes, while the most recent federal measurement – which did not count transfer students – was for 67,000 students.

Clearly, the federal methodology has been missing a significant number of scholarship student-athletes who are competing on NCAA teams,Petr said.By the old standards, some 24,000 students who contributed on the field of play were not included in the calculation of the rate. Additionally, more than 16,000 students who left institutions in good academic standing were universally viewed as academic failures.

The GSR should not be confused with another new NCAA initiative, the Academic Progress Rate, which uses a series of formulas related to student-athlete retention and eligibility to measure the academic performance of all participants who receive a grant-in-aid on every team at every NCAA Division I college and university.

In addition to the GSR, the NCAA will continue to compile data and release results based upon the federally mandated methodology.

The NCAA Office of Public and Media Relations contributed to this report.