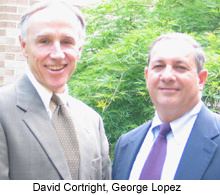 The failure to find weapons of mass destruction in Iraq has prompted much hand-wringing over what went wrong with prewar intelligence.p. Now, two international security experts from the University of Notre Dame contend in an article in the upcoming edition of the prestigious journal Foreign Affairs that too little attention has been paid to what went rightthat the much-maligned UN-enforced sanctions actually worked.p. George A. Lopez and David Cortright argue that the combination of sanctions and inspections helped to destroy Saddam Hussein’s war machine and his capacity to produce weapons. Their article is in the July/August edition of Foreign Affairs.p. On the way to their misjudgments, it now appears, intelligence agencies and policymakers disregarded considerable evidence of the destruction and deterioration of Iraqs weapons programs, the result of a successful strategy of containment in place for a dozen years,the researchers write.They consistently ignored volumes of data about the impact of sanctions and inspections on Iraqs military strength.p. Lopez is a professor of political science and director of policy studies in Notre Dames Kroc Institute for International Peace Studies. Cortright is president of the Fourth Freedom Forum and a research fellow in the Kroc Institute. For more than a decade they have researched the United Nations program of incentives and punishmentsknown collectively as sanctionsthat are aimed at reducing weapons of mass destruction.p. Their article,Containing Iraq: Sanctions Worked,credits sanctions with:p.  Compelling Iraq to accept inspections and monitoringp.  Winning concessions from Baghdad on political issue such as the border dispute with Kuwaitp. Preventing the rebuilding of Iraqi defenses after the Persian Gulf Warp.  Blocking the import of vital materials and technologies for producing weapons of mass destructionp. Foreign Affairs [ www.foreignaffairs.org ] is Americas most influential publication on international affairs and foreign policy and is published by the nonpartisan Council on Foreign Relations. Previous work by Lopez and Cortright is available on The Sanctions Project page of the Kroc Institutes Web site at http://kroc.nd.edu .p. _Contact: Julie Titone, Kroc Institute director of communications, 574-631-8819 or jtitone@nd.edu _ p. _ _ p.