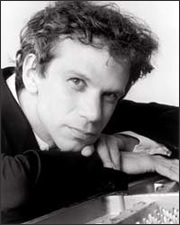 John Blacklow, assistant professor of music at the University of Notre Dame, will perform a solo recital at 8 p.m. Jan. 19 (Wednesday) in the Universitys new Leighton Concert Hall of the Marie P. DeBartolo Center for the Performing Arts.

The performance will include music by Berg, Bach, Chopin and Schumann. Tickets are $10 for the general public, $8 for faculty and staff, $6 for senior citizens, and $3 for students, and are available at 574-631-2800.

A member of the Notre Dame faculty since 2002, Blacklow was one of two artists recognized by Carnegie Hall and the European Concert Hall Organization as a rising star for the 2003-04 concert season. He performed on a six-city European tour sponsored by the two organizations and also was featured in Carnegie Halls “Distinctive Debuts” series.

The performance is presented by the DeBartolo Center and the Department of Music.