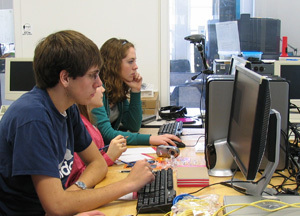 High school students from the United States and 22 other countries will participate in particle physics research through an international Particle Physics Masterclass managed by the QuarkNet Center at the University of Notre Dame.

The class will allow some 400 high school students at 23 sites in the United States to work directly with sophisticated physics data involved in critical research at the CERN collider in Europe. The students will work with particle physicists to analyze measurements from the Large Electron Positron Collider, the predecessor of the Large Hadron Collider (LHC) in a tunnel at the French-Swiss border, to determine how the Z-boson decays into other particles. Although scientists provided the original analysis, the high school students will conduct their own independent analysis.

Student groups will present their results to one another through a national videoconference moderated by scientists at Fermilab.

“They will look at events, make determinations and come to their own conclusions,” said Kenneth Cecire of QuarkNet, who facilitates the Masterclass in the United States. “They will analyze the same data online, but will come to individual, independent conclusions.”

The Masterclass, started in Europe, is a main educational activity of the European Particle Physics Outreach Group. QuarkNet, a federally-funded program bringing particle physics and education reform to high school classrooms, manages the project in the United States.

For additional information on the Masterclass, visit www.science.nd.edu/masterclass.