A program administered by the University of Notre Dame and designed to boost preparation for science and math careers in Indiana’s public high schools has reported substantial jumps in test results among participating students during its first year of operation.

The Advanced Placement Training and Incentive Program for Indiana (AP-TIP IN), administered by Notre Dame’s Institute for Educational Initiatives in partnership with the Indiana Department of Education and the National Math and Science Initiative (NMSI), announced successes for students and teachers at a news conference Monday (Sept. 16) in Indianapolis.

“Among the nine high schools around the state who became our first cohort of participants in the most recent school year, many more students reached their goals of qualifying scores on the College Board’s Advanced Placement tests in key subject areas,” said Karen Morris, program director for AP-TIP IN within the institute.

The number of students in the participating schools who earned a score of 3, 4 or 5 on spring 2013’s math and science AP exams jumped 114 percent, Morris reported at the news conference, which took place at Perry Meridian, one of the public schools that joined the AP-TIP IN initiative in its first year. That figure compares to a gain of 16.2 percent in the 2012-2013 school year among all the public high school students in Indiana and a gain of 8.2 percent among all students taking those tests nationwide. An AP test score of 3, 4 or 5 is required for the student to receive college credit in that subject.

The push for such gains reflects a desire within Indiana and within the nonprofit NMSI to place more students on a trajectory for success in the workforce of the future, which will emphasize college-level skills in the STEM disciplines — science, technology, engineering and math. 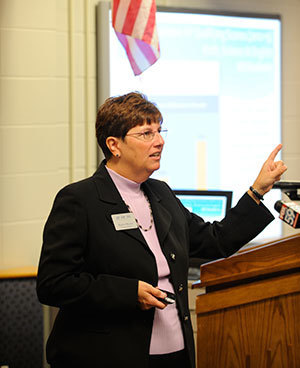 Karen Morris, program director for the AP-TIP IN program in the Institute for Educational Initiatives, presents statistics of the program’s first-year success at a news conference at Perry Meridian High School in Indianapolis

Notre Dame’s Institute for Educational Initiatives started administering the NMSI-designed program in 2011, with funding from the U.S. Department of Education’s Investing in Innovation (i3) fund. The program combines stepped-up training and cash incentives for students and their teachers so as to maximize test-score successes. The program also embraces AP English courses because of that subject’s relevance to career success.

“These results, which actually exceed the first-year increases achieved in other states that have adopted the NMSI initiative, reaffirm our efforts to expand the program in the current school year,” Morris said. This year, 11 additional Indiana public high schools joined with the first cohort of nine where teachers and students have accepted the challenge of more rigorous AP curriculum preparation.

The number of participating schools is expected to grow every year, first using NMSI funding that is backed by the i3 program, but planning to draw upon support from Indiana’s scientific and business community. These employers have an interest in preparing tomorrow’s workforce to excel in the STEM disciplines.

When 2012-2013 scores in math, science and English from AP-TIP IN schools are broken down demographically, the gain in African-American and Hispanic students who achieved qualifying scores was 294 percent at the nine public high schools participating in the AP-TIP IN initiative. The comparable average gain was 31.8 percent for all of Indiana and 16.2 percent nationwide.

The average first-year increase in the achievement of qualifying AP scores among female students in math and science was 166 percent at AP-TIP IN high schools, compared to 25 percent in all Indiana public schools and 8.3 percent throughout the country.

“This is only the beginning for AP-TIP IN, and we at Notre Dame are thrilled to be working with great educators and students around the state to build the human groundwork for a stronger, smarter base of science and technology businesses in Indiana and worldwide,” said Morris.

More information about the program and Notre Dame’s role is available at the Institute’s website at iei.nd.edu.