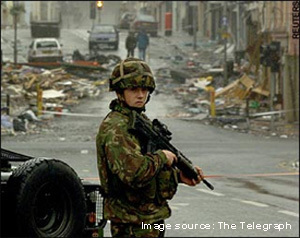 Political violence and the aftermath of war are known to be harmful to children’s and teens’ mental health and well-being, but until now, few studies have examined how this happens.

A new longitudinal study of neighborhoods in Belfast, Northern Ireland, led by University of Notre Dame Psychology Professor Mark Cummings, has found political violence affects children by upsetting the ways their families function, resulting in behavior problems and mental health symptoms among the youths over extended periods of time.

“Our findings suggest that working with families in communities affected by political violence may have long-term benefits for children in those families,” according to Cummings.

The study, in the journal Child Development, was a collaboration among researchers at Notre Dame, Catholic University of America, Queen’s University Belfast, and the University of Ulster. 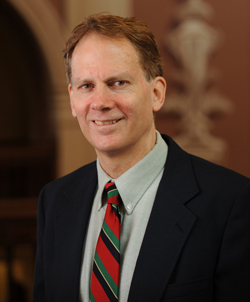 Funded by the Eunice Kennedy Shriver National Institute of Child Health and Human Development, the study involved some 300 families living in segregated, socially deprived neighborhoods in Belfast, in neighborhoods that ranked low on measures of income, health, education, proximity to services, crime, and quality of life. Mothers and children filled out surveys annually for three years, addressing such factors as how their families functioned, children’s emotional and behavioral responses to conflict in the home, and how much they knew about antisocial behavior in the community. Antisocial behavior included, for example, blast bombs or petrol bombs exploded by members of another community or someone beaten by people from another community. Researchers also recorded the number of politically motivated deaths in families’ neighborhoods as an index of political violence.

The study found a link between historical levels of political violence, and current reports of conflict and violence in the community. Awareness of community conflict and violence between Catholics and Protestants was related to higher levels of family conflict a year later. Children who experienced family conflict as a result of political violence reported greater emotional insecurity about family relationships, which also resulted in more mental health symptoms and behavior problems over time.