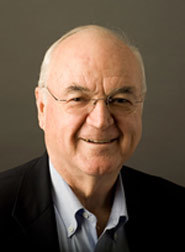 Rev. Richard P. McBrien, Crowley-O’Brien Professor Emeritus of Theology at the University of Notre Dame, died Sunday (Jan. 25) after a long illness. He was 78.

“Father McBrien was a leading theologian and commentator on the Catholic Church,” said Rev. John I. Jenkins, C.S.C., Notre Dame’s president. “While often controversial, his work came from a deep love of and hope for the Church. We pray for eternal rest for his soul.”

Father McBrien joined the Notre Dame faculty in 1980. He served as the chair of the Department of Theology for 11 years and as chair of the Faculty Senate for three years. He previously served on the faculties of Boston College, where he was director of the Institute of Religious Education and Pastoral Ministry, and Saint John’s Seminary. He was the first visiting fellow in the John Fitzgerald Kennedy School of Government at Harvard University during the 1975-76 academic year.

A prolific writer, Father McBrien was the author of 25 books, among them “Catholicism,” “Lives of the Saints,” “Lives of the Popes” and “The Church and Politics.” He also served as the general editor of “The Encyclopedia of Catholicism” and for nearly 50 years wrote a weekly column that appeared in Catholic newspapers nationwide. His areas of scholarly focus were ecclesiology, the relationship between religion and politics, and the theological, doctrinal and spiritual dimensions of the Catholic tradition.

One of the most widely quoted members of the Notre Dame faculty, Father McBrien regularly provided print and broadcast media outlets with commentary on all matters related to the Catholic Church.

Father McBrien was a past president of the Catholic Theological Society of America and a recipient of its John Courtney Murray Award for “outstanding and distinguished achievement in theology.”

A memorial Mass will be celebrated at 3 p.m. on Thursday, March 19, in the Basilica of the Sacred Heart.