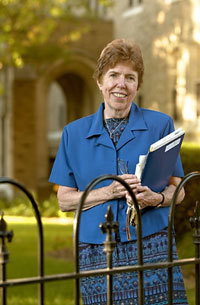 Sister Jean Lenz, O.S.F., former assistant vice president for student affairs at the University of Notre Dame, died this morning (Jan. 21) at Our Lady of the Angels Retirement Home in Joliet, Ill., after a long illness. She was 81 years old.

A Chicago native and a Franciscan sister of the Congregation of the Third Order of St. Francis of Mary Immaculate, Sister Lenz, who earned a master’s degree from Notre Dame in 1967, was among the first women rectors on campus following the University’s transition to coeducation in 1972 after 130 years as an all-male institution.

As an administrator, teacher, mentor and alumna of the University, Sister Jean shaped and shared the experience of its first generation of women. “When I first came to campus, I had planned to assist Notre Dame’s first women for a year or two,” she said when she retired three years ago. “I’m surprised, delighted and grateful that those years turned into 36 years of wonderful ministry.”

Sister Jean was rector of Farley Hall from 1973 until 1983, when she became the rector and chaplain of Notre Dame’s London Program. She was appointed assistant vice president for student affairs in 1984, and served intermittently as an adjunct professor of theology.

In 1998, she received an honorary degree from the University of Portland for her service as “a mentor and example to students of how one might live a life in pragmatic, patient, humorous and prayerful service to others.” Four years later, she published an anecdotal and autobiographical account of that service, "Loyal Sons and Daughters,” which has become a classic among Notre Dame histories. In 2007, her name was added to the Wall of Honor in Notre Dame’s Main Building.

After her retirement, she continued to live in Farley Hall, and continued her ministry, which her close friend, Notre Dame’s president emeritus, Rev. Theodore M. Hesburgh, C.S.C., has said made her “sought out as a friend, counselor and almost-confessor. The time students spend with her exposes them to goodness, fun and deep beauty. Her teaching brings them face to face with the Christ in whom she deeply believes.”

An accomplished storyteller and an unconventionally but strikingly beautiful woman, Sister Jean never failed to be delighted by the surprise she could register in students and others when they noticed that in one of her hazel eyes there was a conspicuous streak of sky blue. She loved to recount how, during her novitiate, she had been assured by an elderly Irish nun that this agreeable facial anomaly indicated that fairy blood flowed in her veins. Such mystic associations were commonplace with her.

She was a devoted Franciscan who loved to read and tell stories about the founder of her order, and to quote from G.K. Chesterton’s biography of him.

“He honored all men,” Chesterton wrote of Saint Francis. “He not only loved but respected them all. What gave him extraordinary personal power was this: that from the pope to the beggar, from the sultan of Syria in his pavilion to the ragged robbers crawling out of the wood, there was never a man who looked into those brown burning eyes without being certain that Francis Bernadone was really interested in him, that he was being valued and taken seriously. He treated the whole mob of men as a mob of kings.”

Anyone who looked into the splendidly mismatched eyes of Sister Jean Lenz learned exactly what Chesterton meant by that.

A Mass of Remembrance will be held at Notre Dame in memory of Sister Lenz on Feb. 6 (Monday) at 5:15 p.m. in the Basilica of the Sacred Heart. Rev. John I. Jenkins, C.S.C., University president, will preside.