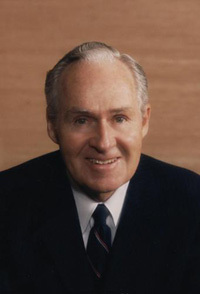 Robert W. Galvin, former fellow and trustee of the University of Notre Dame, died Tuesday (Oct. 11) in Chicago. He was 89 years old.

Galvin, the former chief executive and chairman of Motorola Inc., was graduated from Notre Dame in 1944, going to work for Motorola, a company which had been founded by his father, Paul. He succeeded his father in 1959 and remained chairman until his retirement in 1990, overseeing Motorola’s subsequent expansion from a national to a global company and an increase in annual sales from $290 million to $10.8 billion.

Galvin was elected to Notre Dame’s board of trustees in 1960, serving as a member of that body for 27 years. He also served as one of Notre Dame’s 12 fellows, the highest governing body of the University, from 1967 to 1982. Among his family’s numerous benefactions to Notre Dame is the Galvin Life Sciences Building, the center for the University’s research and teaching in biological sciences.

A visitation will be held Monday (Oct. 17) from 4 to 8 p.m. at Donnellan Family Funeral Home in Skokie, Ill., and there will be a funeral Mass Tuesday (Oct.18) at 5 p.m. at Saints Faith, Hope & Charity Church in Winnetka, Ill.