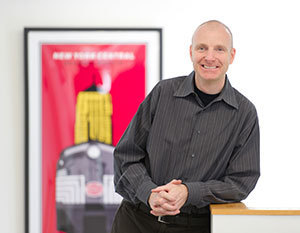 Robert Sedlack, professor of visual communication design, died Saturday (May 30) in his sleep at his home in South Bend. He was 47.

“Robert Sedlack was a visionary leader in the graphic design program at Notre Dame,” said Richard Gray, chair of the Department of Art, Art History and Design. “His approach to design solutions for underserved populations was an exceptional example of turning scholarship into service, of using design to make a difference in the lives of others. Our university has lost an incredible colleague, teacher, mentor, and friend.”

A native of Greencastle, Ind., and a 1989 Notre Dame alumnus, Sedlack earned a master of fine arts degree from Indiana University in 1993, and worked in design firms in Chicago before joining the Notre Dame faculty in 1998.

During his 17 years at the University, Sedlack became one of its most popular and respected teachers, convinced, as he told students in his “Design for Social Good” course, that “graphic design is a culture-shaping force that has the ability to powerfully effect change.”

Although nationally and individually recognized for his design work, Sedlack regarded all of his teaching and research projects as collaborations, and he directed Notre Dame’s undergraduate and graduate design students in course work that engaged such social issues as racial discrimination, gun control, voter participation, xenophobia, rights of immigrants and the social stigma of HIV/AIDS.

Students in his design classes partnered regularly with local organizations such as the South Bend Center for the Homeless and the Juvenile Justice Center, as well as with foundations in South Africa and Haiti.

John T. McGreevy, I.A. O’Shaughnessy Dean of the College of Arts and Letters, said, "Robert was an extraordinary faculty member and colleague, whose passion for design as a social good elevated the program to new heights. He inspired students, and then connected those students to Notre Dame alumni in the world of design, creating a vibrant community of students, faculty, and employers.”

Sedlack’s service to Notre Dame included a project he led in 2001 to redesign icons of the University’s visual identity, including its official shield, typography and color palette. Earlier this year he received the Center for Social Concerns’ Ganey Faculty Community-Based Research Award and the Sheedy Excellence in Teaching Award, the highest honor in the College of Arts and Letters.

Sedlack is survived by his wife, Theresa and their two children, Emma and Trey.