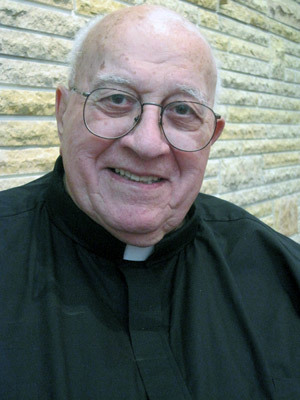 A native of San Giuseppe Jato, Italy, Father Miceli moved to upstate New York with his family when he was six years old. He graduated from Oswego High School, Oswego, N.Y., in 1942 and a year later entered the novitiate of the ’Congregation of Holy Cross":http://holycrossusa.org/ in Rolling Prairie, Ind. A 1947 Notre Dame graduate, he earned a bachelor’s degree in sacred theology from the Gregorian University in Rome in 1949 and a licentiate in sacred theology from Catholic University in Washington, D.C., in 1952. He was ordained a priest the same year.

Father Miceli studied theology at Holy Cross College in Washington for two years before returning to Notre Dame for eight years to teach theology and serve as rector of Stanford Hall. During the 1962 academic year, he taught theology at the University of Portland, and then returned to Notre Dame, where he taught until 1993. He served as rector of Cavanaugh Hall from 1963 to 1990. A Cavanaugh Hall alumnus set up a Rev. Matthew Miceli, C.S.C., Scholarship in his honor, and 17 children of Cavanaugh alumni have been named after him (16 Matthews and one Matthea).

A funeral Mass will be celebrated at 3:30 p.m. Wednesday (Dec. 12) at the Basilica of the Sacred Heart.

Memorial contributions in support of the mission and ministries of the Congregation of Holy Cross may be made to United States Province of Priests and Brothers, Office of Development, P.O. Box 765, Notre Dame, IN 46556-0765.