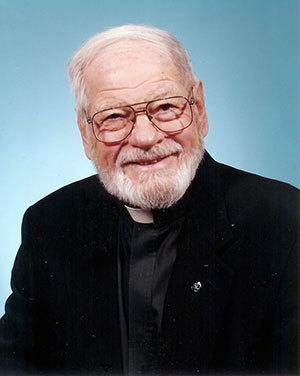 A native of Orange, N.J., Father D’Alonzo was an all-state New Jersey football player when he came to Notre Dame in 1944. In addition to playing on the University’s storied football team, he attended the Naval Officers’ Training School here before entering the Congregation of Holy Cross in 1946. He was graduated from Notre Dame in 1949 and ordained a Holy Cross priest in 1953.

Father D’Alonzo, who also earned a master’s degree in educational administration and sociology from Notre Dame in 1960, taught at Father Baker High School in Lackawanna, New York, at Notre Dame High School in Bridgeport, Connecticut, and at St. Peter’s High School in Gloucester, Massachusetts. In 1971 he was appointed dean of student affairs at King’s College in Wilkes-Barre, Pennsylvania, and served there for 10 years before returning to Notre Dame in 1982.

For the next 25 years, Father Alonzo served on the formation team in Notre Dame’s Moreau Seminary, as chaplain in the campus ministry office, as assistant rector of Pangborn and Carroll residence halls, as director of the campus Bible Study program and as a counselor for student-athletes.

In 1995, Father D’Alonzo received a Distinguished American award from the National Football Association and the College Football Hall of Fame, and in 2005 he received the Notre Dame Alumni Association’s William D. Reynolds Award for “exceptional work with youth for the betterment of the quality of life.”

Memorial contributions may be made to The Congregation of Holy Cross Office of Development, P.O. Box 765, Notre Dame, IN 46556-0765, or online at donate.holycrossusa.org.