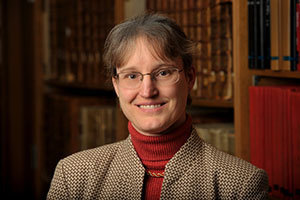 Olivia Remie Constable, Robert M. Conway Director of the Medieval Institute and professor of history at the University of Notre Dame, died of cancer at home Wednesday (April 16).

A member of the Notre Dame faculty since 1995, Constable had directed the Medieval Institute since 2009.

“Remie Constable was a brilliant historian, a generous colleague and a very dear friend,” said Margaret Meserve, associate professor of history at Notre Dame. “Her contributions to medieval studies at Notre Dame were countless, but I will remember her best for her love of her students, her wonderful wit and her extraordinary hospitality. She will be greatly missed.”

Constable graduated from Yale in 1983 and earned her doctoral degree in history in Near Eastern studies from Princeton in 1989. She taught history at Columbia University for six years before coming to Notre Dame.

Constable’s teaching and scholarship concerned interactions between medieval Christians, Muslims and Jews; the Mediterranean world; economic and social history; the history of medieval cities and urban life; medieval Spain; and perceptions of the middle ages in modern novels and film.

“Remie was a consummate professional and at once an exceptionally warm, sympathetic person,” said Thomas Noble, professor of history and Constable’s predecessor as director of the institute. “She will be deeply missed by the many who loved her.”

Among those many will undoubtedly be the 14 Notre Dame students Constable led last fall in Spain on the Camino de Santiago, one of the pilgrimages made during medieval times by the people so central to her scholarship. “We weren’t just the teachers who have all the answers,” Constable said after the journey. “We were really bonding as a group that was looking and thinking and working out what we were seeing. The relationship is so much deeper than just professor and student. At the end of the semester, we won’t want to say goodbye to the class.”

A member of the Institute for Advanced Study in Princeton, Constable was the recipient of fellowships from the National Endowment for the Humanities, the American Council of Learned Societies and the Guggenheim Foundation. She also was named a fellow of the Medieval Academy of America in 2009.

Constable was the author of “Trade and Traders in Muslim Spain: The Commercial Realignment of the Iberian Peninsula 900-1500,” “Medieval Iberia: Readings from Christian, Muslim, and Jewish Sources” and “Housing the Stranger in the Mediterranean World: Lodging, Trade, and Travel in Late Antiquity and the Middle Ages.” She also was at work on a book examining Christian perceptions of Muslim identity in late medieval and early modern Spain.

She is survived by her husband, Matthew Bell, and their sons, Owen and Sam.

Funeral services will be private. A public memorial service will be held at 3:30 p.m. May 21 (Wednesday) in the McKenna Hall auditorium on the Notre Dame campus. The service will be followed by a light reception.