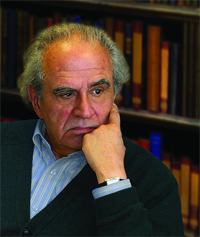 Guillermo O’Donnell, professor emeritus of political science and senior fellow of the University of Notre Dame’s Kellogg Institute for International Studies, died yesterday (Nov. 29) in Buenos Aires after a long struggle with cancer. He was 75 years old.

A native of Argentina, O’Donnell, who joined the Notre Dame faculty in 1982, was graduated from the National University of Buenos Aires in 1958 and earned a doctoral degree from Yale in 1987. He is internationally renowned for original and influential scholarship on Latin American authoritarian regimes, the democratic transitions undergone by many of them, and how modernization and democracy affect each other.

O’Donnell’s numerous books on these and other subjects have reached a worldwide audience through English, Portuguese, Chinese, Korean and Japanese translations. They include “Democracy, Agency, and the State”; “Modernization and Bureaucratic-Authoritarianism”; “A Democracia no Brasil”; “Transitions from Authoritarian Rule”; “Development and the Art of Trespassing”; “Issues in Democratic Consolidation”; and “Dissonances: Democratic Critiques.”

“We should never forget the horrors of the authoritarian regimes that plagued a good part of Latin America,” he wrote in the preface to his last book. “This is the point of no return, and nothing will ever justify returning to such regimes. On the other hand, the flaws of our present democracies are as serious as they are evident.”

At Notre Dame, O’Donnell played a crucial role as the first academic director of the newly established Kellogg Institute from 1982 until 1997.

Scott Mainwaring, Conley Professor of Political Science at Notre Dame, and O’Donnell’s successor as director of the Kellogg Institute, praised his friend as “a giant in contemporary social science, known around the world for his unique intellectual creativity, his path-breaking originality, and his passion for democracies that function decently.” (Read Mainwaring’s full tribute here.)

“Throughout his career O’Donnell posed great new theoretical questions about tremendously important developments in the contemporary world,” Mainwaring said. “He was a deeply learned person who always drew upon the antecedent scholarship, yet one of his extraordinary gifts was recognizing new questions and new problems that had not hitherto been addressed. He stands as one of the most important thinkers about democracy and dictatorships in the history of political science.”