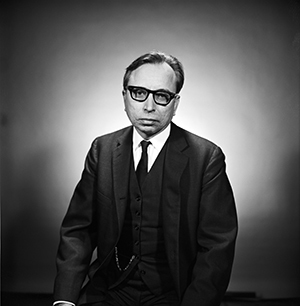 Lewis E. Nicholson, professor emeritus of English at the University of Notre Dame, died Tuesday (April 28) at his home in South Bend. He was 93.

A renowned scholar in medieval and Anglo-Saxon studies and a member of the Notre Dame faculty since 1958, Nicholson taught courses ranging from Beowulf, Chaucer and Middle English metrical romance to classes on the Gothic language and Old Norse. For the last 18 years of his life, he directed the Hesburgh Library’s Medieval Library Initiative.

“Among the last of the so-called ‘bachelor dons,’ Lew Nicholson has been an integral and vital part of the intellectual life of Notre Dame community for over six decades,” said Christopher Fox, professor of English and director of the Keough-Naughton Institute for Irish Studies. “After surviving a Kamikaze attack on his transport ship in the Pacific in World War II and moving on to complete his doctoral studies at Harvard, Lew distinguished himself as an internationally known Anglo-Saxonist and Beowulf scholar. But what is perhaps most extraordinary about him is what he contributed to the University after his retirement. His tireless efforts, usually until late hours in his office, tripled the number of Medieval Literature books in Notre Dame’s library and subsequently helped us to surpass Harvard in Irish language holdings and to build a major collection in Anglo-Saxon, Middle English and Old Norse. This legacy will continue with the donation of Lew’s own formidable collection — the product of over 60 years of work — to the Hesburgh Library and a Lewis E. Nicholson Graduate Medieval Fellowship for a doctoral student in the Department of English. Much has been gained here, but a part of Notre Dame has been lost.”

Born on his family’s farm near Hopkins, Missouri, Nicholson attended grade school in a one-room country school house in Xenia, Missouri, and was graduated with honors from Hopkins High School in 1940. After studying one year at Northwest Missouri State Teachers College and another at the University of Iowa, he volunteered for Army service in the South Pacific during World War II. In 1946, availing himself of the G.I. Bill, he returned to his studies at Iowa, where he earned bachelor and master’s degrees in English and then went to Harvard, where he earned a second master’s degree and his doctorate. He taught briefly at Ohio State, Harvard and the University of Michigan before joining the faculty at Notre Dame, where he spent the rest of his life.

Famous among generations of Notre Dame’s English majors for his exhortations about the importance of perspective, Nicholson insisted that students consider the voice of a storyteller before coming to conclusions about the meaning of a work, and believed that Anglo-Saxon poets treated point of view with as much care as modern writers. “Pay attention to point of view!” became a bellowed mantra of his lectures. A classically eccentric campus figure, he like to go for long walks around the campus peering out from under an English cap and flourishing an 18th-century walking stick.

Along with his teaching, Nicholson published prolifically in the literary study of Anglo-Saxon poetry and especially on Beowulf. The author of “Oral Techniques in the Composition of Expanded Anglo-Saxon Verses” and numerous monographs, he also edited anthologies of ancient, medieval and Anglo-Saxon literary criticism. One of his last scholarly projects was to edit the only complete modern English translation of 23 Anglo-Saxon homilies from the 10th-century Vercelli Book.

Nicholson is survived by two sisters, Neola A. Stringer and Irma M. Zapf, and by a brother, Herbert Walter Nicholson, all of Maryville, Missouri. A funeral Mass will be celebrated at 3:30 p.m. Thursday (May 7) at in the Basilica of the Sacred Heart.