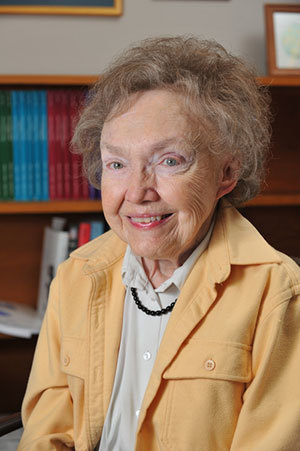 A native of Washington, D.C., Aldous was 12 years old when her father died, and her suddenly widowed mother obtained an advanced degree from Columbia University, subsequently teaching home economics, child care and family relations at Kansas State University. Her mother’s difficult and, in those days, highly unconventional choice of a career path so affected Aldous that she ever afterward credited it as inspiration for her own somewhat groundbreaking career.

Aldous joined the Notre Dame sociology faculty as the William R. Kenan Jr. Professor of Sociology, thus becoming the University’s first female holder of an endowed professorship at a time when there were few women on the faculty. From 1976 until her retirement in 2012, she taught, studied and wrote about family sociology, family policy, gender, work and families and intergenerational relationships.

While at Notre Dame, in addition to teaching popular and heavily subscribed courses in her field, Aldous was author of more than 50 published articles and was author and editor of several books. Insisting that “you can’t talk about families without talking about gender,” Aldous said, “I was concerned with families from the very beginning, so I automatically became interested and became the first sociologist here concerned with gender.” She also helped establish the University’s Gender Studies Program in 1988.

“Joan left behind an extraordinary record of scholarship, and her contributions to Notre Dame and to our department are immeasurable,” said Rory McVeigh, professor and chair of sociology. “She was one of the nation’s leading scholars, and perhaps the leading scholar in the sociology of family. At department lunches held for incoming graduate students, she would inevitably introduce herself by saying, ‘Joan Aldous is my name and family sociology is my game.’ She was a wonderful colleague and friend to many of us who were fortunate enough to get to know her.”

A visitation service will be held at 1 p.m. Saturday (Nov. 8) at Palmer Funeral Home-River Park, 2528 Mishawaka Ave., South Bend, with a memorial service following at 2 p.m. Online condolences may be left at www.palmerfuneralhomes.com.