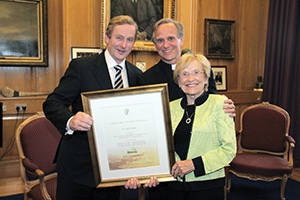 Father Jenkins celebrated Mass with his 11 siblings at their mother’s bedside before she died.

Helen was a trained nurse and her husband, Dr. Harry Jenkins Jr., who died in 2004 at age 75, was a gastroenterologist. In addition to 12 children, the couple is survived by 43 grandchildren and 23 great grandchildren.

At his inauguration in 2005 as Notre Dame’s president, Father Jenkins said of his mother:

“As I accept responsibility as head of the Notre Dame family, I look to my mother for inspiration. She raised 12 children … As you may have guessed, she’s Catholic … Twelve is a nice biblical number.

“In contrast to the good shepherd who would leave all her sheep to go off in search of the one, Mom herded us all into the car and Dad stomped on the gas. We found Rick safe and sound. But after Mom declared that your brother was lost and now is found, we were disappointed not to get the fatted calf.

“My mother has always shown a supernatural talent for making 12 people all feel important and loved to the same degree at the same time. If ever I display any of that talent in the future, as I hope I do, you can be sure it did not originate with me.”