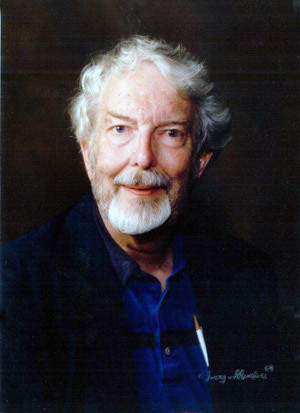 Frederic Winkler Syburg, professor emeritus of film, television, and theatre at the University of Notre Dame, died Friday (Feb. 15) at Zilber Hospice in Wauwatosa, Wis. He was 88 years old.

A Milwaukee native, Syburg grew up there and graduated from Milwaukee University School before going to Brown University, where he studied for a year before enlisting in the Army Medical Corps at the outbreak of World War II.

After the war, Syburg studied at Loras College in Dubuque, Iowa, where he met his future wife, Jane Mitchel, then a student at neighboring Clarke College. Following the completion of his studies in theater and literature at Columbia University, they were married June 17, 1950, and settled in Dubuque, where Syburg became the first lay and male member of Clarke’s faculty.

In 1954, the Syburgs and their three children moved to South Bend, where Frederic joined the faculty of what was then called the Department of Speech and Drama at Notre Dame.

Syburg’s teaching career at Notre Dame spanned five decades. He directed some 50 productions including “The Importance of Being Ernest,” “Macbeth,” “The Tempest,” “Amadeus” and “Arms and the Man,” many of them staged in Washington Hall. He also earned a master’s degree from the University in 1961.

An accomplished actor, who performed in numerous Notre Dame and South Bend Civic Theater productions, Syburg was a member of the National Catholic Theatre Conference and served as the first vice-chairman of the honorary dramatic fraternity, Alpha Gamma Omega. He also worked as a speech consultant and coach for several corporate clients, but his favorite teaching assignment was always the Freshman Seminar program course in Notre Dame’s College of Arts and Letters. Notre Dame’s Alumni Association presented him with its Arthur S. Harvey Award in honor of his dedication to “young thespians and the University theatre” in 2005.