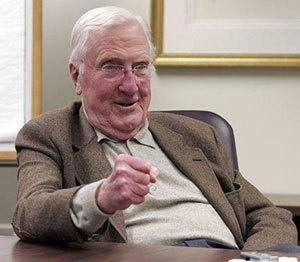 Former Ohio governor John J. Gilligan, professor emeritus of law at the University of Notre Dame, died Monday (Aug. 26) at his home in Cincinnati. He was 92.

A Cincinnati native and a 1943 Notre Dame alumnus, Gilligan entered the U.S. Navy after graduation to serve as a gunnery lieutenant in World War II. He earned a Silver Star for saving several crew members from the destroyer USS Rodman after it was taken under Japanese fire and set ablaze off Okinawa.

After the war, Gilligan earned a master’s degree in literature from the University of Cincinnati and taught at Xavier University from 1947 to 1953 when he was elected to the first of six terms on the Cincinnati City Council. In 1964, he was elected to the U.S. House of Representatives and served one term. Elected governor of Ohio in 1970, he served until 1975, when he became a fellow at the Woodrow Wilson International Center for Scholars in Washington, D.C. In 1977, he was appointed by President Jimmy Carter to direct the U.S. Agency for International Development and for the next two years served as principal adviser to the president and chief spokesman to Congress on all matters affecting foreign economic development. He resigned his government positions in 1979 and in May of that year received an honorary doctor of laws degree from Notre Dame in recognition of “his belief that government exists to serve those persons in society who are least able to speak for themselves.”

Gilligan joined the Notre Dame faculty in 1979 as the Thomas and Alberta White Professor of Law, exulting in his inaugural lecture that “a tremendous opportunity lies before our University today, simply because under divine Providence it has achieved, at precisely this moment in time, a unique preeminence and influence in American life” and that Notre Dame could play an instrumental role in “bringing into being what Jacques Maritain described as ‘a new humanism, a theocentric, more integral humanism which would consider man in all his natural grandeur and weakness, in the entirety of his wounded being inhabited by God, in the full reality of nature, sin and sainthood.” Seven years later, appointed the first director of Notre Dame’s Kroc Institute for International Peace Studies, Gilligan was able to provide conspicuous detail to Maritain’s vision.

“Jack Gilligan practiced what he preached,” according to his colleague and friend, Charles K. Wilber, professor emeritus of economics and fellow at the Kroc Institute. “Under his direction, the Kroc Institute followed a collaborative style where both faculty and staff deliberated on issues around a large table. The use of recycled paper was standard, and a family atmosphere reigned. He allowed babies to share an office with their mothers and encouraged all who worked there, faculty and staff alike, to participate beyond their basic duties, helping new foreign students settle into housing, taking them to Goodwill to buy winter clothes, and attending academic talks and institute events. Jack’s range of close friends was vast and an indication of his openness and generosity. He didn’t use the term ‘integral humanism’ lightly.”