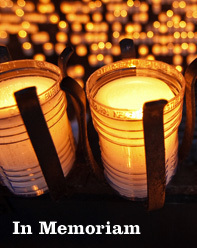 Edward A. Goerner, professor emeritus of political science at the University of Notre Dame, died Oct. 2 (Tuesday) at Memorial Hospital in South Bend. He was 82 years old.

A native of Brooklyn, N.Y., Goerner graduated from Notre Dame in 1952 and served three years in the U.S. Navy before earning a doctoral degree in political science from the University of Chicago in 1959. He taught for a year at Yale before joining the Notre Dame faculty in 1960.

A political theorist with a particular interest in religion and politics, Goerner was one of the University’s most popular teachers, once described in a student publication as “one of those unique individuals you can build an education around” and “a compelling lecturer who discusses political theory not in the intricate language of the academician but rather in the terms of the layman. The result is often discussion in Goerner classes which lasts 20 minutes beyond the bell.”

“Ed Goerner was a towering figure in Notre Dame’s Political Science Department and one of its most respected and conscientious members,” said Donald Kommers, Emeritus Joseph and Elizabeth Robbie Professor of Political Science and professor of law. “Ed was more than an esteemed colleague. He was an accomplished political theorist, a brilliant teacher, a friend and mentor to hundreds of students, a Notre Dame loyalist to the bone, and a person of enormous personal grace and elegance. Ed was also much more than a political scientist. He was a person steeped in liberal learning and Catholic thought and totally committed to the liberal arts; we cherished him for his broad intellectual perspective and ever-inquiring mind. I shall miss him not only for the colleagueship we shared over the decades but also for the conversations we have had in recent years owing to our common interest in opera and symphonic music.”

Goerner contributed numerous articles to such journals as Political Theory, the American Journal of Jurisprudence, and Continuum and was the author of “Peter and Caesar” and editor of “The Constitutions of Europe” and “Democracy in Crisis.” He also served as associate editor of Notre Dame’s journal of political theory, The Review of Politics.

A Mass of Christian Burial will be celebrated at 9:30 a.m. Oct. 8 (Monday) in Notre Dame’s Basilica of the Sacred Heart.