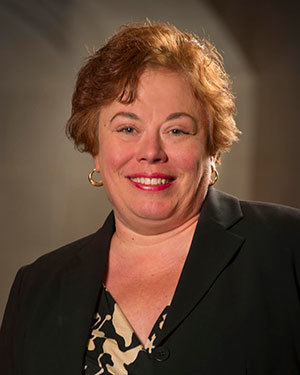 Catherine F. Pieronek, associate dean for academic affairs and director of the Women’s Engineering Program at the University of Notre Dame, died Thursday (April 9) at Memorial Hospital in South Bend. She was 52.

“Cathy Pieronek was the quintessential Domer,” said Peter Kilpatrick, McCloskey Dean of Engineering. “She had an engineering and a law degree, a fierce loyalty to our sports teams and our students, and a total embrace of the famous ‘Irish prayer’ about the rains falling gently on your fields. She was also incredibly and lovably human: committed, personable, loyal, dedicated, and always thinking carefully and deeply about the good of the other. We miss her terribly and pray for the Lord’s gentle and loving embrace of her husband Chuck and her family.”

A native of Detroit, Pieronek was graduated from Notre Dame in 1984 and earned a master’s degree in aerospace engineering from the University of California at Los Angeles in 1987. She worked as a senior systems engineer at TRW, where she helped develop both the Data Relay System on NASA’s Compton Gamma Ray Observatory and the Chandra satellite.

She returned to Notre Dame in 1992 to pursue a law degree and to serve as editor-in-chief of the Journal of College and University Law. She earned her law degree in 1995 and soon after became the director of alumni relations for the Notre Dame Law School and editor of its quarterly publication. Interested in gender-based equity issues, she became a nationally recognized expert in Title IX issues, writing and lecturing widely on that topic.

In 2002, Pieronek joined Notre Dame’s College of Engineering, serving as its associate dean and establishing the women’s engineering program to increase the retention rate of women in the college.

Last year Pieronek was named a fellow of the Society of Women Engineers (SWE) cited for having had a lasting and positive impact on engineering education, and for illuminating public discourse on gender equity in science, technology, engineering and mathematics (STEM) fields.

On Dec. 9, 2006, in the Basilica of the Sacred Heart, Pieronek married Charles Shedlak, who survives. Other survivors include her mother, Joann Pieronek, her sister Patty (Ian) Frost, brother Tom (Erin) Pieronek, and her nieces and nephews Madelyn, Maxwell, Daniel, Brendan, Nathan, Craig and Megan.

Visitation will be held Sunday (April 12) from noon to 8 p.m. in Kaniewski Funeral Home, 3545 N. Bendix Drive, where a rosary will be prayed at 5 p.m. A funeral Mass will be celebrated Monday (April 13) at 9:30 a.m. in the Basilica of the Sacred Heart, followed by the burial in Cedar Grove Cemetery. Memorial contributions may be made to the Pieronek Family Scholarship Fund at the University of Notre Dame.