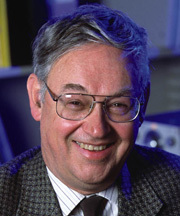 Daniel J. Costello Jr., Leonard Bettex Professor of Electrical Engineering at the University of Notre Dame, has been named the winner of the 2009 Donald G. Fink Prize Paper Award by the Institute of Electrical and Electronics Engineers (IEEE).

IEEE, the leading professional association for the advancement of technology, with a membership of more than 375,000, publishes 144 transactions, journals and magazines. The Fink Prize is presented for the most outstanding survey, review or tutorial paper published among all of these materials.

Costello’s prize-winning paper, titled"Channel Coding: The Road to Channel Capacity,"appeared in the June 2007 issue of the Proceedings of IEEE. Co-authored by G. David Forney of the Massachusetts Institute of Technology, the paper describes the 60-year trajectory of research into making digital communications more robust and efficient through the controlled introduction of redundancy. Channel coding is used in every existing digital communication system, including cell phones, cable modems, DSL lines and satellite systems.

Throughout his career, Costello has made sustained and profound contributions to the research described in the article. His research, which is supported by the National Science Foundation, National Aeronautics and Space Administration, and Motorola Communications, focuses on digital communications, with special emphasis on coding theory, information theory, communications networks and bandwidth efficient communication.

Costello was graduated from Seattle University and earned his master’s and doctoral degrees from Notre Dame in 1966 and 1969, respectively. After several years as a faculty member at the Illinois Institute of Technology, he returned to the University as a member of the electrical engineering faculty in 1985. He served as department chair from 1989 to 1998.

Costello is a fellow of the IEEE and has served as a member of the Information Theory Society board of governors. He also has served as associate editor for the IEEE Transactions on Communications and IEEE Transactions on Information Theory. Among the many honors in his career, he has received the Alexander von Humboldt Foundation Research Prize, the Third Millennium Medal and the Seattle University Centennial Alumni Award.