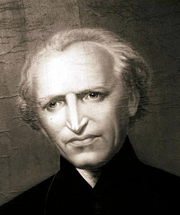 According to an announcement last week by the Congregation of Holy Cross, its euphoniously named founder, Basile Antoine Marie Moreau, is likely to be beatified next year.This news is of particular interest to the University of Notre Dame, which was born as a project of the Holy Cross order in 1842 and continues to rely on Moreaus followers for its administration, inspiration and communion in the Catholic Church.

A person who isbeatifiedby the Catholic Church has significantly advanced towardcanonization,or the status of being officially and solemnly proclaimed a saint.It is arguably inappropriate to regard beatification and canonization as achievements, unless one regards them as Gods achievements.God, after all, makes the saint, and the Church (to say nothing of the saint) simply rejoices that He has done so.

In Father Moreaus case, the achievement began precariously onFeb. 11, 1799, in the French village of Laigne-en-Belin, where he was born to a poor family of wine peddlers, the ninth of 14 children.Persecution had driven the devoted religious faith of his parents underground, and the social turbulence of the time is conspicuous in the municipal registry of his birth, which is dated according to the calendar imposed by the French Revolution,the 24 th day of Pluvius in the year VII of theFrenchRepublic.The memory of a suppressed Church stayed with him throughout his life.

As the official suppression began to relax in post-revolutionaryFrance, the very young Moreau was able to attend a parish school where his prayerfulness and intellectual acumen were soon noticed by the pastor.Persuaded that he was called to the priesthood, his parents sent him to one of the preparatory seminaries which were reappearing in the early 19 th century, and he was ordained by the time he had reached the age of 22.

Nearly consumed by zeal to revive and restore the Church, Father Moreau earned a reputation as an absorbing and inspiring preacher.He became a popular seminary teacher and administrator, as remarkable for his strong character and iron will as for his personal piety and care for the outcast.

If you have a marked preference for certain people,he instructed his students,it should be for the poorest, the most abandonedthe least gifted by natureIf you surround them with the most assiduous attention, it is because their needs are greater, and it is only justice to give more to those who have received less.

Father Moreaus humility, confidence, piety and frankness could combine in anomalous, even astonishing, ways.He wrote a letter on the death of his mother which included this almost nonchalant observation:I might add that in the middle of the night, while I was praying at her bedside, two angels appeared carrying a crown which they held over her bed.Quoting that letter in his magisterial biography of Notre Dames founder, Father Edward F. Sorin, C.S.C., Father Marvin OConnell commented thatone who had so easily taken in stride a direct revelation from God would appear to have had little to fear from the ordinary vicissitudes of life or the machinations of mere men.

Whether or not he had anything to fear from them, the mere men who educated and inspired Father Moreau were the products of a very hard age.His hardscrabble family had been as oppressed by those overthrown by the revolution as by those who were victorious in it; his first catechism lessons were taught by a priest who had routinely risked his life for the Gospel during the Reign of Terror; and his seminary teachers espoused exactly the sort of dour and gloomy theology to be expected when people search for tracks of God through bleak and bloody times.

It should come as no surprise that by the time he had begun a rigorous seminary regimen, Father Moreau had also imposed an individualistic and spartan rule on his personal life, rising long before dawn for prayer and scripture reading, eating little beyond subsistence rations, regularly and scrupulously examining his conscience, and holding his rare experiences of joy or even contentment at a suspicious distance.By thetime he had founded the Congregation of Holy Cross, the flinty and sporadically imperious personality emerging from these exertions frequently and painfully clashed with the equally strong character of his favorite follower, Father Edward Sorin.In the days after Notre Dames establishment in 1842, these two complicated priests often quarreled hotly over authority, policy, obedience, and money, and their relationship remained neuralgic and uneasy even until Father Moreaus death in 1873.Nevertheless it is uncontestable that they shared a faith profound enough to ensure a mutual tolerance that could eventually give way to forgiveness and reconciliation.May he rest in peace,Father Sorin said of his superior, mentor and occasional adversary,and soon help us on the narrow path to heaven.

Father Moreaus posthumous ecclesial promotion might indeed provide such help.It is at the very least an occasion to consider the witness and ministry of the religious community he founded; an occasion to marvel at what happens when an all-too-human nature is infiltrated by divine grace, a process much like the growth of saxifrage, those little flowers that burst through rocks.