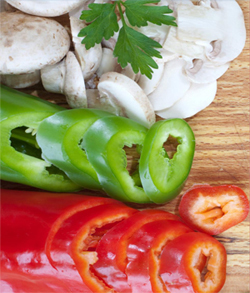 This spring, the University of Notre Dame continues a 14-year-long tradition of raising awareness about the Holocaust. This year’s approach will be a little different, and it will literally offer “food for thought.”

The annual Holocaust Project, begun by Rabbi Michael Signer, the Abrams Professor of Jewish Thought and Culture, has always held events highlighting the need for individuals and societies to pursue justice and tolerance and to be on guard against the genocidal inclinations that still imperil the world. Rabbi Signer, who died last year, sought to help students make the connection between the Holocaust and the human family’s cry for solidarity.

“It’s a universal theme, and it fits in very well with what this University’s goal and purpose are,” says Betty Signer, the spouse of the late Rabbi, who carries on the work of coordinating the Holocaust Project. She says the 2010 program, “Food For Thought,” scheduled for April 20 to 24 (Tuesday to Saturday), taps into an even more expansive connection she has seen between the lessons of the Holocaust and the values that inform students’ everyday lives.

Several years ago, while she was visiting the site of the Auschwitz concentration camp, Signer read the remnants of notes in which a Nazi administrator had quantified the minimum number of calories necessary daily to keep a prisoner alive to do assigned tasks, plus replacement costs when an inmate died of malnourishment.

“I thought to myself, how could anyone sit down and calculate that without any sense of feeling?” Signer recalls.

This led her to consider carefully various instances of starvation in history and its use as a tool to eliminate whole groups.

“Whoever controls the food source has power over the people,” Signer commented. With this call to awareness, highlighting how global and local issues of food and water supply can be tied to questions of power and justice, malevolence and compassion, the 2010 Holocaust Project program will present films and lectures grouped around the subject of food.

Notre Dame faculty, staff and students will be invited to consider questions like food safety, nutrition, water contamination, the pros and cons of our globalized and corporate-controlled food supply, impacts on the environment and energy, the “local food” movement and other issues.

Food for Thought events include “Sustainability: The Key To Today’s Food Revolution,” a lecture by Marion Nestle, author of “Food Politics: How the Food Industry Influences Nutrition and Health,” which takes place April 20at 7:30 p.m., in the Hesburgh Center Auditorium.

On April 23 at 3 p.m., Peter Menzel and Faith D’Aluisio of the Hungry Planet present “FOOD THINK: A Global Nutritional Survey from Hungry Planet and What I Eat” in Room 129 of DeBartolo Hall.