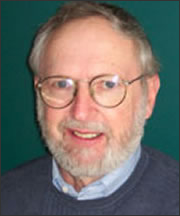 George M. Marsden, Francis A. McAnaney Professor of History at the University of Notre Dame, is the 2005 recipient of the Louisville Grawemeyer Award in Religion for his biography of early American theologian Jonathan Edwards.

Given jointly by Louisville Presbyterian Theological Seminary and the University of Louisville, the annual award includes a cash prize of $200,000.

Titled “Jonathan Edwards: A Life,” Marsdens biography “portrays Edwards as exemplifying the tension between the Puritan evangelical heritage and the secular world and mindset then emerging out of the Enlightenment,” said award coordinator Susan R. Garrett, professor of New Testament at Louisville Presbyterian Theological Seminary. “This central cultural tension of Edwardsera surfaces today as the ongoing struggle between evangelicalism and intellectual inquiry in American Christianity and in the American political process.”

An expert on the history of Christianity in America, Marsden holds bachelors degrees from Haverford College and Westminster Theological Seminary, and masters and doctoral degrees in American studies from Yale University. He taught at Calvin College and Duke University before coming to Notre Dame in 1992. He has written or edited more than a dozen books on the history and present state of fundamentalism in America and the culture of American university education.

Marsden has received fellowships and awards from the National Endowment for the Humanities, the Pew Freedom Trust and the John Simon Guggenheim Memorial Foundation.

In addition to the Grawemeyer Award, Marsdens “Jonathan Edwards: A Life,” published by Yale University Press, won a Bancroft Prize from Columbia University, the Merle Curti Award from the Organization of American Historians, and the Annibel Jenkins Prize from the American Society for Eighteenth Century Studies. It also was named one of 10 “Books of the Year” for 2003 by Atlantic Monthly, one of eight “Best Religious Books of 2003” by Publishers Weekly, and one of 12 “Notable Religious Books of 2003” by Richard Ostling of the Associated Press.