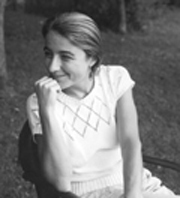 Julia Adeney Thomas, associate professor of history at the University of Notre Dame, has received a New Directions Fellowship from the Andrew W. Mellon Foundation. The $181,000 grant will fund a book-length study titled “Photography and Democracy: Between History and Sex in Occupied Japan.”p. “I want to demonstrate how a historian might use photography to think about political transformation,” Thomas said. "My project investigates democratization efforts during the American occupation of Japan (1945 to 1952) by looking at photographic images and how they were used, consciously and unconsciously, by Americans and Japanese in defining citizenship. I will explore how postwar Japanese citizens were made to look, how they held their bodies, wore their clothes, smoked their cigarettes, and how others were meant to behold them in the public sphere.p. Thomas will spend the next two years studying the history, theory and technical aspects of photography, including a year at the Institute for Advanced Study at Princeton University, where she will hold a National Endowment for the Humanities fellowship. The Mellon fellowship will support course work at the School of the Art Institute in Chicago and the University of Chicago, and research at numerous libraries and museums in the United States and Japan, as well as a year of leave.p. Thomas specializes in the history of modern Japan with an emphasis on comparative intellectual history, concepts of nature and historiography. Her article in the American Historical Review on photography and Japanese memories of World War II received the Berkshire Conference of Women Historians’ Best Article of the Year award. She also is the author of “Reconfiguring Modernity: Concepts of Nature in Japanese Political Ideology,” for which she received the John K. Fairbank Award for the best book in Asian history from the American Historical Association.p. New Directions Fellowships are for faculty in the humanities or humanistic social sciences who have not yet received tenure or have recently done so, and who wish to acquire systematic training in areas outside of their own disciplines.p. The Mellon Foundation makes grants on a selective basis to institutions in higher education, in cultural affairs and the performing arts, in population, in conservation and the environment, and in public affairs.p.