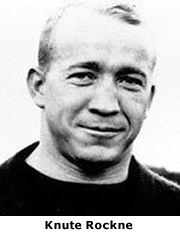 Elvis Presley, who had ample opportunity to reflect on the phenomenon of fame, once said:The image is one thing and the human being is another.

TitledRockne: Crossing the Last Chalk Line,the exhibit features many artifacts that have never before been on public display. It opened May 27 and continues throughJan. 7, 2007, and commemorates the 75 th anniversary of Rocknes death at the age of 43.

The first section of the exhibit features a moving depiction of events surrounding Rocknes death March 31, 1931, when a Los Angeles-bound Western Airlines plane carrying the Notre Dame coach and seven others crashed in aKansasfield. A stand of funeral home flowers, bold newspaper headlines proclaimingRockne is Dead,and condolence telegrams from around the world communicate an atmosphere of sudden, saddening and almost incomprehensible tragedy.

Also on display is a telegram Rockne sent to his wife at9:52that morning which reads:Mrs. Bonnie Rockne= Leaving right now. Will be at the Biltmore. Love and kisses= Knute.Close by is a second telegram Mrs. Rockne received a few hours later from Western Airlines:We regret it becomes our painful duty to notify you of the death of Mr. Knute Rockne who was a passenger on our westbound plane .

Other items on display in this section include pieces of the plane and the watch Rockne wore that day, its shattered crystal reading11:15 a.m., the exact time of the planes impact.

Another section of the exhibit offers insights into Rocknes childhood and his days as a Notre Dame student and, later, assistant football coach.

Much of the 3,500-square-foot gallery focuses on Rocknes extraordinary career as Notre Dames head football coach from 1918-30, when he led five undefeated teams, produced 20 first-team All-Americans, won five national championships and achieved a record of 105 wins, 12 losses and five ties: an .881 winning percentage that remains unsurpassed by any college or professional football coach.

Among the many notable items in this section are the original New York Herald Tribune article in which Grantland Rice dubbed Notre Dames backfield of Crowley, Layden, Miller and Stuhldreher theFour Horsemen; an original 1924 national championship banner; a clipboard, sweatshirt and whistle used by the coach; and what is believed to be the sole surviving mini-replica of the 1925 Rose Bowl Trophy given only to the players on that team.

Another section of the exhibit is testament to Rocknes entrepreneurial genius. More than a half century before the endorsement deals and television shows that are routine for todays college football coaches, Rockne created the model for the modern coach.

Visitors can hear a stirring speech the coach delivered to Studebaker auto salesmen in his role as a sales motivator; view samples of sporting goods he developed and endorsed for Wilson Sporting Goods; learn about the football coaching clinics he pioneered at Indianas Culver Academy and other locations; and examine a pristine 1933 StudebakerRockneautomobile.

A.E. Houseman, in his poemTo the Athlete Dying Young,suggested that it is better to die in ones prime, at the height of ones glory. The final section of the Rockne exhibit is testament to that sentiment. From near-hagiographic biographies aimed at young people to a comprehensive treatment of the filming and South Bend premiere of the 1940 Hollywood filmKnute Rockne All American,the section reflects Rocknes emergence as a cultural icon.

The exhibit title is drawn from an entry in an essay contest launched by aHollywoodproduction company in 1931, a few months after Rocknes death, to promote its film,The Spirit of Notre Dame.In his entry titledWhat the Spirit of Notre Dame and Knute Rockne Mean to Me,15-year-old Bernard J. Miller cited a pep talk Rockne once delivered to his team in which he said,Today is our day; lets not quit until the last chalk line is crossed… .

TheNorthernIndianaCenterfor Historys exhibit flawlessly passes the last chalk line, familiarizing visitors with both the legendary Knute Rockne and the man behind the legend. Hours for the exhibit arenoonto5 p.m.Sunday and10 a.m. to 5 p.m.Monday through Saturday. Admission ranges from $6.50 to $8.

Murray Sperber, author ofShake Down the Thunder: The Creation of Notre Dame Football,will deliver a lecture titledDiscovering Knute Rockneat 6:30 p.m. Thursday (July 27) at the Center for History. Admission to the talk is free with the purchase of a museum admission.

More information is available at 574-235-9664 or on the centers Web site: www.centerforhistory.org .