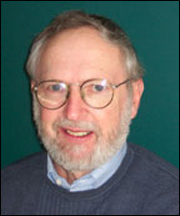 George M. Marsden, Francis A. McAnaney Professor of History at the University of Notre Dame, is the recent recipient of three national prizes for his biography "Jonathan Edwards: A Life? (Yale University Press)p. One of three winners of Columbia University’s prestigious Bancroft Prize for 2004, Marsden was selected from among an unusually crowded field of 180 authors whose books were nominated for this year’s best in American history.p. Marsden also claimed the 2004 Merle Curti Award for the best book in intellectual history from the Organization of American Historians (OAH), as well as the 2003 through 2005 biennial Annibel Jenkins Prize, given by the American Society for Eighteenth Century Studies (ASECS) to the author of the best book-length biography of a late 17th or 18th century subject.p. In his biography of Edwards (1703-1758), Marsden brings to life this controversial American theologian who was committed to fostering religious sensibilities in the increasingly secular world of his time. Bancroft jurors stated, ?Moving easily from the expansive realms of trans-Atlantic thought to the narrow precincts of town and gown squabbles, Marsden captures both the man and his times in all their color and complexity.?p. ?These awards have been quite beyond my expectations,? Marsden said. ?What is especially satisfying is the wide range of people who have appreciated the book. Since my interest has been to entice people to learn about Edwards, this has all been wonderfully gratifying.?p. One of the nation’s leading scholars of American religious history, Marsden is the author or coauthor of more than a dozen books, including ?The Search for Christian America,? ?Religion and American Culture? and ?The Outrageous Idea of Christian Scholarship.?p. One of the most coveted honors in the field of history, the Bancroft Prize was established in 1948 with a bequest from Frederic Bancroft, the historian, author and librarian of the Department of State, to provide steady development of library resources, to support instruction and research in American history and diplomacy, and to recognize exceptional books in the field. A list of past winners is available at http://www.columbia.edu/cu/lweb/eguides/amerihist/bancroftlist.html .p. Founded in 1907, the OAH is the largest professional society dedicated to the teaching and study of American history.p. The ASECS, established in 1969, is an interdisciplinary group dedicated to the advancement of scholarship in all aspects of the late 17th through the early 19th centuries.p. Marsden also was one of five finalists for the National Book Critics Circle award for a biography.In addition, he recently made an appearance on C-SPAN2’s “Book TV” and delivered the plenary address at a conference at the Library of Congress marking Edwards’ 300th birthday.p.