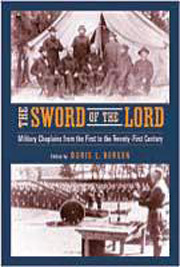 Doris L. Bergen, associate professor of history at the University of Notre Dame, has edited a new book on military chaplains and the development of the military chaplaincy.p. Published by the University of Notre Dame Press, “The Sword of the Lord: Military Chaplains from the First to the Twenty-First Century” is the first book to examine the development of the military chaplaincy across history and geography ? over some 2,000 years, from Europe to North America.p. Contributors to the collection of essays analyze specific historical moments in the development of the chaplaincy beginning in ancient times and progressing through the Crusades, the English Civil War, the American Civil War, both World Wars and the Vietnam War.p. Consisting of four key themes, the book examines the historical development of chaplaincy over time, the emotional and spiritual relationships between chaplains and the men and women they serve, chaplains? often precarious position between military and religious authorities, and the moral and theological dilemmas raised by the chaplaincy.p. Bergen joined the Notre Dame faculty in 1996 and specializes in 20th century German history, with an emphasis on the Nazi era and the Holocaust, and European women’s history. She is the author of “War and Genocide: A Concise History of the Holocaust” and ?Twisted Cross: The German Christian Movement in the Third Reich."p. A graduate of the University of Saskatchewan, Bergen earned her master’s degree from the University of Alberta and her doctorate from the University of North Carolina.p. Contributors to the book include Bergen and Rev. Michael J. Baxter, C.S.C., assistant professor of theology at Notre Dame.p.