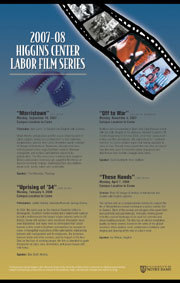 The seventh annual Higgins Center Labor History Film Series at the University of Notre Dame will begin Sept. 10 (Monday) with the presentation ofMorristownat 4:30 p.m. in the auditorium of the Hesburgh Center for International Studies.

A one-hour documentary,Morristownexamines what effect globalization, along with the waves of immigration it often compels, is having on communities. It chronicles nearly a decade of change in Morristown, Tenn., through interviews with displaced or low-wage Southern workers, Mexican immigrants and workers and families impacted by globalization.Discussion of the film will be led by Timothy Matovina, associate professor of theology and Notre Dames William and Anna Jean Cushwa Director of the Cushwa Center for the Study of American Catholicism.

The series, sponsored by the University’s Higgins Labor Research Center, is free and open to the public.It will feature three additional films throughout the academic year, all beginning at 4:30 p.m. in the Hesburgh Center auditorium.They are:

The Higgins Labor Research Center is named for the late activist priest Monsignor George G. Higgins, a powerful voice for social justice in the workforce in the last half of the 20th century.The center provides a multidisciplinary view to the study of the economic and social consequences of different systems of work organization and the relationship between workers and management.