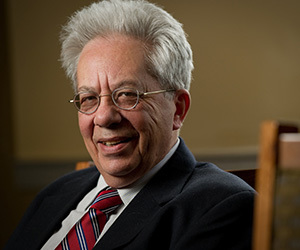 The University of Notre Dame is initiating a search for a new director for its Hesburgh-Yusko Scholars Program. Joseph A. Buttigieg, a longtime distinguished faculty member at Notre Dame and the inaugural director of the program, has announced his retirement at the end of the current academic year.

“Professor Buttigieg has provided peerless leadership for the Hesburgh-Yusko Scholars Program and has been instrumental in the creation of an intellectually stimulating and vibrant environment for all who are part of it,” said Rev. Hugh R. Page Jr., vice president and associate provost for undergraduate affairs. “He has been a truly remarkable student mentor and an eloquent apologist for the program’s transformative dimensions. It has been an honor to work with him and I wish him Godspeed as a new chapter in his life as scholar and teacher begins.”

The Hesburgh-Yusko Scholars Program is a merit-based scholarship and leadership development initiative that equips students to have a transformational impact on the world. It is named for the late Rev. Theodore M. Hesburgh, C.S.C., Notre Dame’s president from 1952 to 1987 and one of the 20th century’s most influential leaders in the Catholic Church, higher education and national and international affairs, and Mark W. and Stacey Miller Yusko, who underwrote creation of the program with a generous gift in 2009.

In addition to their academic pursuits on campus and summer experiences across the country and around the world, Hesburgh-Yusko scholars have been actively involved in the local community, volunteering at South Bend’s Center for the Homeless and women’s shelters, clinics, hospitals and neighborhood centers. They have created and run a non-violence program and music school for the homeless, interned in the mayor’s office, helped operate a food co-op, tutored in after-school programs and volunteered with Habitat for Humanity, the Red Cross and other agencies.

Among their most creative and effective projects is The Jubilee Initiative for Financial Inclusion (JIFFI), a nonprofit community financial services provider that offers an alternative to predatory payday lending through cash advances and assistance in financial planning.

The scholars also have presented TedxUND talks, assisted in the creation of student clubs such as PrismND and DreamCatchers and played a prominent role in the annual “Show Some Skin” diversity production.

Buttigieg’s main areas of interest are modern literature, critical theory and the relationship between culture and politics. In addition to numerous articles, he is the author of a book on James Joyce’s aesthetics, “A Portrait of the Artist in Different Perspective.” He is also the editor and translator of the multi-volume complete critical edition of “Antonio Gramsci’s Prison Notebooks,” a project that has been supported by a major grant from the National Endowment for the Humanities. Several of his articles on Gramsci, the Italian philosopher, writer and politician, have been translated into Italian, German, Spanish, Portuguese and Japanese. He was a founding member of the International Gramsci Society, of which he is president, and the Italian minister of culture appointed him to a commission of experts to oversee the preparation of the “edizione nazionale” (national edition/complete works) of Gramsci’s writings. Buttigieg also serves on the editorial and advisory boards of various journals, and he is a member of “boundary 2,” an editorial collective that publishes a journal of literature and culture.

Buttigieg’s wife, Anne Montgomery, was a member of the Notre Dame faculty for 29 years, and his son Pete is the mayor of South Bend.