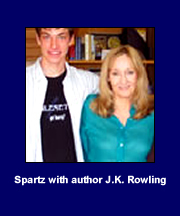 At first glance, Emerson Spartz looks like any other incoming Notre Dame freshman. Tall and trim, bright-eyed and quick-witted, he seems like your typical 18-year-old about to enter college.

But appearances can be deceiving. This is no ordinary Muggle.

Spartz is the creator and mastermind behind MuggleNet ( www.mugglenet.com ), not just a Harry Potter Web site, but the Harry Potter Web site, drawing literally millions of visitors per week from around the world to discuss all things Hogwarts (the name of the school where Potter and his friends learn wizardry in the best-selling series of books by British author J.K. Rowling). The site is so popular, in fact, that it is ranked among the Top 1,000 Internet sites – not just related to Harry Potter, but on the entire Web – according to Alexa, a prominent on-line tracking company.

And to think, it all started from Spartz’ bedroom inLaPorte,Ind., where he grew up as more or less a typical Muggle (the term for non-wizard humans in the Harry Potter series). Well, not quite typical. He was homeschooled starting at age 12, which is when he discovered a hobby that would turn out to be a much bigger enterprise than he ever imagined.

“When I started homeschooling, I suddenly had way too much free time and I thought it would be fun to make a Web site,” he recalls. “I was really into Harry Potter, so it started off just for fun. And I guess it still is for fun, but it’s a little more serious now.”

A little. Since MuggleNet went live, it has gone from a one-person pastime to something of a conglomerate, complete with a full-blown staff consisting of moderators and contributors from around the globe, translations into just about every language used in the world today, a server that now resides on a “farm” in a remote location several states away, and advertisers, who have turned Spartz’ little just-for-fun venture into a profitable business along the way.

Things have changed a bit for Spartz, too, whose dedication to Harry Potter has led to a few of his own adventures over the past several years. He co-sponsored through MuggleNet what he dubs the “largest book-release party in history” inIllinoisthis spring when the most recent Harry Potter book, the sixth in the series, came out. Warner Brothers Studios invited him to cover the premieres of the third Potter movie inNew YorkandLondonfor MuggleNet, and also flew him out to theLondonset of the fourth movie.

And then there was the early-morning phone call in May that took him completely by surprise.

“It was from a woman claiming to be ‘Jo.’ Not Jo Rowling, not J.K. Rowling, just ‘Jo,’” he remembers. “I had no idea what to say. Most of the conversation is a total blur because it was early in the morning and I wasn’t expecting it at all. I do remember her inviting me toScotlandto interview her on the day of the release of the new book. I said I’d be honored and I didn’t talk to her again until I showed up at her office.”

“Jo” was indeed J.K. Rowling, who had invited Spartz and the webmaster of another popular Harry Potter site to meet with her as a token of her appreciation of all their efforts.

For Spartz, it was the opportunity of a lifetime. But there was one catch – before the interview, he had to read the book and fast.

“I was up all night reading because I had to make sure I finished it in time. So I’d been up for 36 straight hours and was a little bit on edge,” he recalls of his arrival inScotland. “But Rowling was so personable and friendly and so easy to talk to that I couldn’t believe I was ever nervous about meeting her. The interview was only supposed to last one hour, but we talked for two, and it seemed like it was only 30 minutes.”

A quick trip (so quick, in fact, that the airline only returned his lost luggage to him a half hour before it was time to go home), but one that will undoubtedly leave a lasting impression on Spartz, who now is turning his attention away from Hogwarts and toward Notre Dame. The University’s “sorting hat” has designated him a resident of Knott Hall, and he intends to study business, about as opposite as you can get from Harry Potter’s field of study, which features potions, spells and flying broomsticks.

Spartz is not, as you might think, an aspiring writer, or even a huge fan of the fantasy genre. He also has lukewarm interest in starting or running another Web site down the road. Calling himself a businessman at heart, he hopes to make his post-Notre Dame career in the corporate world, most likely, he acknowledges, moving on from MuggleNet.

“Harry Potter has a limited shelf life,” he reasons. “It’ll always be popular, but once the seventh movie comes out, it will never be at the same level it was before. I have such a large staff and some have been around a really long time, and they run most of the general operations by themselves. So I’ll always own the site, but it’s not going to be a final career for me.”

Whatever the future holds, one thing is certain, at least for the next four years. Hogwarts may have Harry Potter, but Notre Dame has Emerson Spartz, who will no doubt bring his own brand of magic to the Class of 2009.

And he doesn’t even have to run and jump through a brick wall to a make-believe train platform to get here. Imagine that.